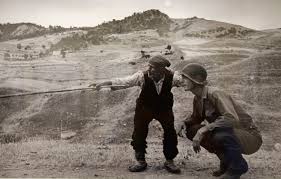 TROINA: AN INTERVIEW WITH ROBERT CAPA.

Troina is my lovely town, a jewel in the mountains, rich in art, history and culture, namely the first Norman Capital, the town of the Oasi Institute, a highly- specialised hospital. I could talk about several subjects but I just want to talk about a world wide topic:World War II.

Although I did not witness the war myself, I can only image the horror and the pain told in books and by my grandparents’stories. The war is really close to my heart, because Troina evidently has many scars and proofs of the battle, inasmuch it was immortalized by the American photographer Robert Capa.

When he arrived in Troina with the American army on the 6thof August 1943, the town had been in an ongoing battle since the 31stJuly and in just six days the city was almost completely destroyed. Forced to find refuge in the nearby countryside, the people have become the protagonists of acts of human solidarity towards those who needed help applying themselves in the difficult job of the moral and material recovery of the little town.

Certainly the life of many people has changed, they didn’t know whether to think about their future with hope or with terror. The pain still remained in their soul and in their eyes, as Capa’s photos prove. In one of them, there is a man holding a child in his arms, who is badly injured.

Sadly, the children have particularly suffered the war. Sometimes I think, behind the smile and the love of my grandparents there are children, who have lived the war, forced to grow up too fast. That’s why I have decided to take this battle as a symbol of this painful event; and…with a little imagination, I would imagine myself  interviewing Robert Capa :

Me: Hello Robert, may I ask you a few questions about your experience in the war and about your photos? Also because I’m a photography lover, too.

Me: To start with, tell me specifically about your experiences in Troina.

Capa: In troina…it was the first time. I continued an attack until the end, but it was the chance to shot great photos; they are simple pictures, but they show how awful the war was, actually. The little village in the mountains, was completely in ruins. We had been laying on the ground in the town square, in front of the Cathedral, tired and melancholic.  “Fighting, dying or taking pictures no longer made sense”I thought.

Me: despite this, you have continued to take photos, though…and what did you feel while shooting these thorny scenes?

Capa:I believe, the war has bestowed a range of such bad emotions on me that even through photos, I’m able to represent what I and the people by my side have really felt; but when I look at them again, I feel the same emotions, that I felt during the battle, so I dare say I felt grief, but I tried to hide it behind my photos.

Me:Now, I am about to ask you an usual question…in this battle, is there anything which has touched you positively?

Capa: Obviously, the end of it, because the people were really joyful, everyone showed me and the other soldiers, their humanity: the gentlemen wanted to shake our hands, the children threw flowers in our jeeps, the young ladies blew us kisses and the old ladies offered food to us. They are simple acts but full of love.

Me: and…what did you do for those people?

Capa: all you could do was to help individuals caught up in war, try to raise their spirits for a moment and let them know that somebody cared.

Me: what you have done is very beautiful…and I want to thank you for this interview.

It would be great to have an interview with Capa , but nowadays we remember the battle by means of his photos, they are in “Torre Capitania” and the citizenry received “Civil Merit Medal” in 2007, because though the war has put a strain on the people, they have overcome it with courage and inner strength.

After all, battles have always been remembered and one day we will certainly remember the current battle against Covid-19. They are surely quite different battles, but in the case of WWII the people fought against the worst of man-made violence: WAR and despite this, they got up stronger than before, ready to fight the post-war period, a period of huge poverty, but which opened a long way towards a long-awaited PEACE.

Wattpad, a social network for writers

There is an app that is unknown to many, but that only shy teenagers know, with some Fandom and young writers. This app is called Wattpad.

Football is my passion!

Tonight I would like to talk about my favourite hobby and sport as well: football! As you may know, it’s a team sport played with