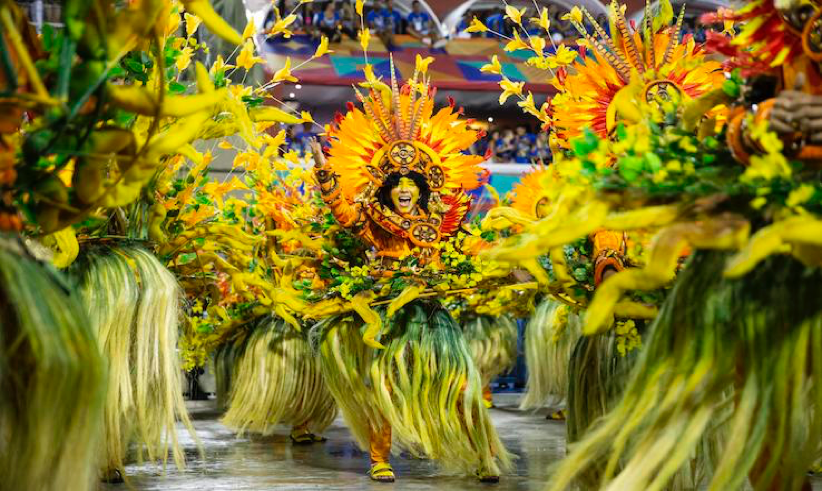 THE WONDERS OF THE RIO CARNIVAL.

The Rio Carnival is the largest show in the world and the oldest carnival in Brazil.

It originates from the Portuguese Carnival, even if it spread only in the 1830s when the fashion of making dinners and masked balls in the palaces of the bourgeoisie of Rio was imported from Paris. The first dance during the Rio Carnival was held in 1840 with participants dancing polka and waltz, while samba was introduced in 1917.

In the 19th century the first cordoes (cords in Portuguese) were born, groups of people who paraded playing and dancing in the streets of Rio.

Later the modern blocos were born, in Portuguese “neighborhoods” in which various groups of people parade in personalized themed costumes, play and dance with drums and dancers.

It is thought that the Carnival tale was influenced by the Etrudo, a festival inspired by the Italian carnival tradition.

The Rio de Janeiro Carnival is known around the world especially for the lavish parades organized by the main samba schools in the city.

Twelve of the excellent samba schools participate with the aim of challenging each other and taking home the title of champions, as well as the golden banner.

Participants belonging to each school must choose a theme and build related allegorical floats; instead, the composers and musicians of the group think of creating a soundtrack: with their spectacular choreography and rhythmic dances they will try to involve a jury of 40 judges.

The parades last four nights and are part of an official competition that takes place in the Sambodromo, at the end of which a school will be declared the winner of the year with the most characteristic dance of the Rio Carnival which is the Samba.

The Rio de Janeiro Sambodromo is an architectural structure that hosts events in the form of a parade. It is about 700 meters long along a driveway called Avenida Marques de Sapucaì lined with structures that host spectators.

The costumes worn are gorgeous, carefully chosen. The first costumes were costumes of European derivation. Today the costumes that are at the Sambodromo are of Afro-American derivation and they are bright and colorful, made of sequins and spangles.

Carnival in Brazil is celebrated every year in the four days leading up to Lent. Lent, which begins on Ash Wednesday, is a forty-day period of abstinence and fasting in preparation of Christian Easter. It is a time when you have to give up worldly pleasures, such as meat, chocolates and alcohol. The exuberance and celebrations related to carnival in Brazil can be seen as the last big party before six long weeks of sacrifice.

The Rio Carnival is one of the world-famous tourist events that every year attracts a crowd of Brazilians and foreigners who arrive in Brazil specifically for this event. It is also visible on live Tv streaming and allows millions of people to participate even from far away.