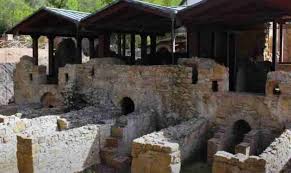 The “Villa Romana del Casale” is a beautiful and elaborate Roman Villa or palace situated near the town of Piazza Armerina, on the slopes of “Mount Mangone” in the valley of the Gela River. It is considered one of the most prestigious monuments of the late ancient period in the Mediterranean. Since 1997, it has been part of the UNESCO World Heritage Sites.

Gino Vinicio Gentili discovered the villa in 1950 and started to explore it following the reports of the local inhabitants. The founder dated the plan of the villa back to the tetrarchic age (285-305). The marvellous mosaic discovered constitutes a piece of art, unique in the world, which covers 3500 square metres.

Built on different levels, the villa is divided into four areas, with more than 60 environments:

The identification of the owner is still unknown; however, it is thought that the owner was Lucio Aradio Valerio Proculo Populonio, governor of Sicily. The games he organized in Rome were so sumptuous that they were remembered for a long time, and maybe some mosaics depict these wonderful events.

Today you can visit many rooms, starting from the porch courtyard and the Honorary Arch in the thermal area, the Vestibule and the portico of the peristyle. You can also visit the service areas, including the “Palestrite” room, the room of “Piccola Caccia” and the corridor of “Grande Caccia”. The mosaics of these two areas show hunting scenes. Again, the Basilica, the room with Cupid and Psyche, the Arione myth mosaic in the southern master apartments, the room of Eros and Pan, and “Ulysses and Polyphemus” in the northern master apartments.

The mosaic of Ulysses and Polyphemus

This mosaic shows the homonym scene taken from the epic poem of the Odyssey by Homer.

In the poem Ulysses lands on the island of the Cyclopes during his journey home from the Trojan War and, with some of his men, enters a cave inhabited by the Cyclops Polyphemus.

Trapped in the Cyclops’ cave, Ulysses found a way to escape: he offered some very good wine to Polyphemus, who enjoyed it so much that he promised Ulysses a guest-gift, asking him his name: Ulysses said his name was “Nobody”.

The Cyclops, drunk, began immediately to sleep, and Ulysses with his men planted in his eye a red-hot stick. Polyphemus screamed so loudly that his brothers heard him, but when they asked why he called for help, he replied that “Nobody” was trying to kill him. His brothers, thinking he was drunk, left. The next morning, while Polyphemus was bringing out his flock, Ulysses and his soldiers clung to the bellies of the sheep, managing to escape.

In this mosaic, the Cyclops Polyphemus has three eyes (and not one, as the Greek mythology says) because the work represents a theatrical show, so the Cyclops is an actor with one eye painted on his forehead.