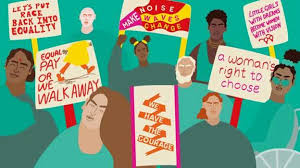 THE POWER OF WOMEN.

Adam and Eve are the first symbols of diversity (for believers) but the female and male monkeys themselves are also symbols of diversity. Women and  men have always been opposites,  men went  hunting,  women cooked what the men had hunted or collected during the day. Women looked after her children, the men worked.  Women cleaned the house, the man voted for a government. Women keep  families going,  men study. There has always been the superiority of one sex over the other, a men superior over women.

In the 19th century

Women were excluded from political life because they were considered inferior and unable to understand politics. Many women of the popular social classes work as laborers, farmers, servants, in factories, for reasons of economic necessity but the social condition remained unchanged.

In the twentieth century

The conditions and behavior of women undergo a major change. A participation of women in the labor field has led to a rebellion such as the “women’s revolution” which has questioned this superiority and disparity of the sexes.

Scientific development and the post-war period allow women to be able to work less thanks to household appliances, to have fewer children thanks to birth control pills and thanks to the development of society we can see how women begin to play important roles in society.

One of the first results obtained by the feminist movements was the Seneca Falls Convention of 1848, which has as its principles the refusal to obedience, that is, the rebel against submission by the male society. The first wave of feminism is in the name of emancipation; at this stage, women’s claims and struggles aim to achieve equal rights. In the second wave, after that of the early twentieth century, feminist movements aim at the “liberation” of women, at affirming a female identity that is not assimilated to the male one, at recognizing and enhancing the differences that men and women are bearers of.

The feminism of equality

Equality feminism demands that women have the same rights as men, be at the same level and be considered as capable as men. The struggle for the vote, for political office, for active participation in social life dates back to the suffragette movements, a word deriving from suffrage, the right to vote.

At the beginning of the twentieth century, women imposed themselves on society, burst onto the public scene as an autonomous subject, capable of understanding and wanting without the support of a man who is a husband, a father, a priest. This movement, however, did not have great results.

After the First World War, the barriers between the sexes are broken. This happens because men’s society is frozen for a period, so…

In Italy, access to universities was seen in 1875, but in high school in 1883. The various rights evolved from 1919 but the full affirmation of women within culture and education took place in 1963.

There is also gender inequality in various geographic areas. In the Latin countries there are conservative positions between men and women; in Common Law countries, civil and political rights acquire a liberal tradition; women in industrialized societies obtain forms of protection at work but not as a recognition of quality, but as help to a weak subject who needs support. In 1977 in Italy the treatment of job opportunities for both men and women was introduced.

The various rights develop, first with regard to the Reform of the right to the family of 1975, on the divorce of 1970 and on abortion in 1978; in 1996 sexual violence becomes a crime against the person.

Between the sixties and seventies of the twentieth century, women sought “liberation” and emancipation. The second wave protests to ensure that there is a universality between man and woman, race and social class; it is a movement that seeks to erase oppression and achieve equality in gender difference. Feminism denounces patriarchy and everything that supports gender inequality in every sphere, be it work, school or daily.

In that period the barriers that considered the woman incapable of understanding and wanting collapse; but the injustices against women will continue to this day. There is talk of violence, whether it is physical, mental, sexual, economic, despite the fact that women have succeeded in affirming themselves, they will not be accepted by the male society for what they are.

Women’s struggle is an unfinished battle even nowadays as we can see, the difference between man and woman has never been overcome. Women are strong subjects, capable of studying, capable of working, capable of supporting the economy, capable of governing and governing herself, capable of looking after her children, capable of doing everything a man does and even more. Women are  equal to men but there is still a some journey until they reach equality in all sectors.