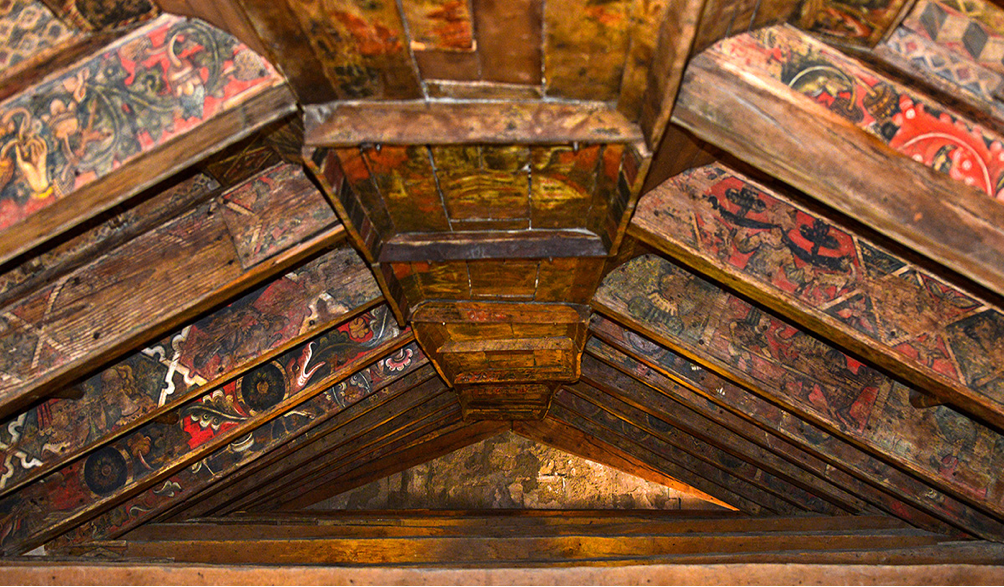 THE PAINTED WOODEN CEILING OF THE CATHEDRAL OF NICOSIA.

The Cathedral of Nicosia, A PEARL IN THE HEART OF SICILY, has the privilege of preserving a rare example of medieval “tectum depictum” hidden from the gaze of visitors by the current vault painted in the 19th century by the Manno brothers. The wooden ceiling of the Cathedral of St Nicolò, thanks to its quality and extension, today finds very little feedback in medieval churches in Europe. A vast figurative apparatus covers the entire available surface, embracing the most disparate themes. In a context made up of geometric and phytomorphic motifs, heraldic emblems, inscriptions, characters belonging to the religious sphere and, above all, to the worldly, intertwine, with busts of ladies and gentlemen adorned with precious robes and jewels, figures of crossbowmen, duelists, cardinals and pontiffs.

The roof can be accessed from inside the church, first through an iron staircase and then through a stone staircase that passes through the bell tower. It is a wooden roof of the “hull” type with exposed trusses, resting, in correspondence with the recess in the wall, on honeycomb shelves. The wooden structure consists of a main frame of 14 grooves, 28 shelves between 13 spans, decorated with subjects of the flat connections of the sub-mirrors: centrally it is crossed by the hull with 13 panels and 26 side shells. A very lively tempera decoration with clear and brilliant colours ranging from deep red to blue, from golden yellow to black, from white to dark green, spreads over the entire surface with an uninterrupted flow.

The wooden roof of Nicosia must be included in the general framework of the artistic period that includes the entire fourteenth century up to the following forty years. The ceiling needs a wide and careful reading, where it is not only art that is called into question but also other disciplines: in fact, inside the wooden roof, we find several fragments, many iconographies and writings, difficult to interpret, to which a very thorough and exegetical study must be dedicated. Unfortunately, the authors are unknown: they are perhaps different artists, as the presence of various stylistic levels suggests, which could be defined as the “Masters of the wooden roof of the Cathedral”.

Around 1800, the precious wooden ceiling was covered and relegated to a mere “attic” and had to wait a full 100 years before a German scholar, Walter Leopold, in 1917, “rediscovered” it by reporting it in an architecture magazine published in Berlin. The restoration site for the wooden ceiling, which saw the involvement of professionals, institutions, research institutes, consultants and experts, was started in April 2007.

Trying to bring order to the thousands of decorations and inscriptions on the roof, we can catalog the various iconographies in 4 categories:

The paintings of the wooden trussed ceiling, now unfortunately hidden inside the Cathedral, constitute a huge and fundamental patrimony of Nicosian art, history and culture, relevant but little known and which therefore must be “brought to light” and made usable and everyone’s heritage, before the neglect of man and the passage of time erase these precious art relics, which give honour and prestige to our beloved town.