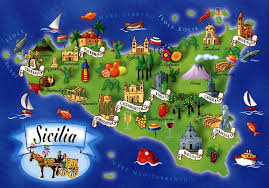 THE MAFIA IN SICILY.

Sicily, a land of great innovations and beautiful landscapes, has always been considered the birthplace of Mafia, a criminal organization that is, unfortunately, also present in other parts of the world.

Mafia comes from the need for economic power: money that it’s obtained through the trafficking of arms, drugs and even people; doing business with politicians to get favours in exchange for votes or, I must also mention, through the famous “pizzo” a sort of “tax” that the mafia asks traders in exchange for protection, but those who do not pay most of the time risk seeing their shop set on fire.

But let’s go back to the origins. Mafia rose in Palermo in 1863. Cosa Nostra is the term used to define the general mafia in the region, and it is very organized, as it presents “men of honour” who are responsible for carrying out murders or other requests from their leaders. There are several names to call it in other regions The Camorra was born in Campania and has been able to create even real criminal “systems” that exploit the poverty of people in suburban cities, such as Naples itself, dealing with drugs, weapons and illegal waste; The ‘Ndrangheta is located in Calabria, although today it is also widespread in Lombardy, Emilia Romagna and abroad. It is organized in ‘ndrine, groups of families interested in drug trafficking and the conquest of political power in some municipalities.

An episode of the Mafia that we Sicilians remember particularly is that of the murder of Paolo Borsellino and Giovanni Falcone, two magistrates who tried to discover all the secrets of this criminal organization in order to destroy it slowly. However, they didn’t like to be considered heroes, in fact they were afraid of the “bad guys” too, but despite this they founded a “pool”, thanks to which they managed to capture hundreds of “Mafiosi”, but for this reason they were killed. Falcone died on May 23, 1993, from a 5 quintal TNT explosion that mad his car almost fly in the air; Borsellino died on July 19, 57 days after his friend and colleague’s death in another explosion.

It is absolutely terrible that people only have to die because they try to express their opinions and keep on the right side.

But how is it possible that these intimidations and acts of violence still exist in 2020?

This is a question that young people in particular cannot explain. This is why in Palermo there is an organization called “addio pizzo”, which invites numerous traders to fight against it. Moreover, films and TV series of denunciation have developed awareness and the will to try and fight from the bottom of society.

Hopefully, some day the world will be healed from this “pestilence”, and our Sicily will be famous only for its great beauty and culture.