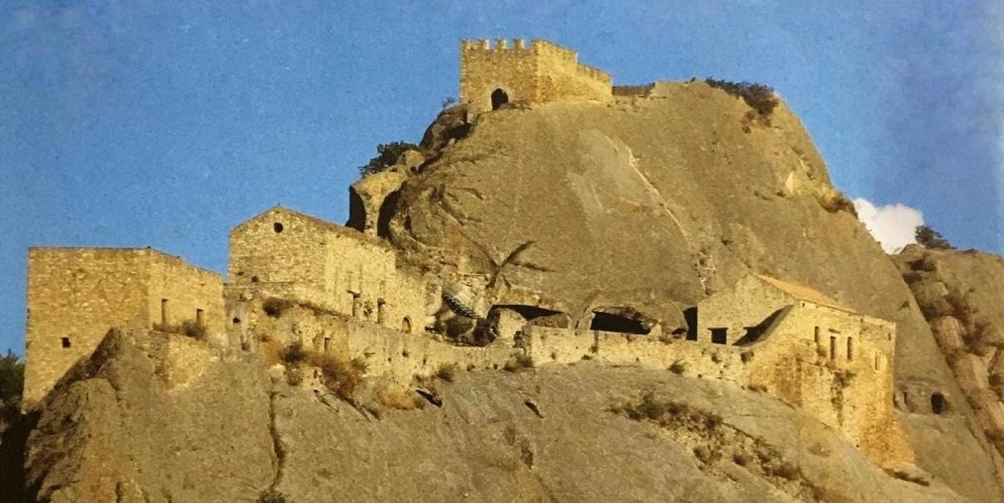 The castle of Sperlinga, a name that derives from the Greek “Spélaion” with the Latin mediation “Spelunca” and means cave, was built on a rocky emergence where large hypogeal environments probably already existed. To the south of the castle there are several caves that were used as homes until the 50s of the XX century, but which today have become a storage place. This historical part of the town of Sperlinga is the principal feature of the town of Sperlinga and is also clearly visible by means of its large size compared to the town which has smaller houses.

Thanks to this magnificent castle, Sperlinga has been recognized since 2006 as one of the most beautiful villages in Italy; it is also an important tourist destination thanks to its history dating back to medieval times.

The first document about the castle dates back to 1082 in a privilege of Count Roger, with which he grants some territories and castles to the church of Troina, including Sperlinga. During the years between 1082 and 1132, in which Sperlinga reappears in a second document, there was no news about this town. New documents were then found narrating the history of Sperlinga starting from 1133 with the arrival of the Normans.

The history of Sperlinga, which concerns only the castle because it was the only existing part before, given the lack of houses that arrived several years later, is in correspondence with the history of the families who owned it, starting from 1132 with Russo Rubeo with the title of first baron, who was the most faithful supporter of the crown and the throne under the Normans, until 1282, which last year was marked by the most important event in the history of Sperlinga: the Sicilian Vespers.

The Sicilian Vespers was that popular revolt that broke out in Palermo, a massacre against the French invaders who dominated Sicily in those times. The Angevins were driven out and any of them who could not pronounce the word “ciceri” (chickpeas) in dialect was killed. The reasons for this siege were various; the fact related to Sperlinga was when the rebellion against the domination by the Angevins (French) spread and a French garrison was to be in the castle of Sperlinga. When the news reached them, they decided to close the doors of the castle and take refuge inside, where they remained for 13 months, to escape the anger of the people. We don’t know exactly the reasons for this choice by the Angevins, nor the modalities of this event, but we know of two testimonies relating to the fact:

1. The farms of the lands in Calabria that the king of Anjou gave them as a reward for their heroic resistance.

2. The Latin phrase “QUOD SICULIS PLACUIT SOLA SPERLINGA NEGAVIT”, engraved in the first arch at the entrance to the castle, which means: “What Sicilians liked only Sperlinga denied” which refers to this betrayal by Sperlinga towards the reasons for the Sicilian Vespers revolution.

This episode proved its strength, due to its exceptional structure and defensive capacity, for which it was also called a stronghold; moreover it gave rise to various legends, that is, stories that are only partially true, such as that of the cheese that is said to be thrown from the castle to make it clear that they were wealthy people; the legend in which they told that they threw boiling oil on the soldiers who tried to enter the castle with stairs or various objects and lastly the legend in which it is said that the bells of oxen and sheep rang to make it clear that they had many animals.

However, there were also true historical narratives, including an event also told in a novel was that of the false door. This door was so called because it was not the main entrance door, but a hidden door that only the Angevins who were inside the castle knew and used to stock up on supplies. At a certain point, however, this door was no longer hidden because it was discovered by the astute Giordano, protagonist of the story, who kidnapped three of those peasants, under heavy threats he made them confess everything that was happening inside the castle and also discovered that a woman was kidnapped by the Angevins; with a well-studied method they entered the castle to recover that woman and took advantage of it to kill some men. This assault on the castle failed because Giordano took the woman he was looking for and left, forgetting the other soldiers who had been left without a guide. When Giordano tried to reenter the castle, he realized that the Angevins had closed the entry routes so Giordano, full of shame because he had failed, left Sperlinga forever and the survivors of his ranks followed him.

In memory of this historical event, every year, on August 16, the “Tortone festival” is celebrated in the town of Sperlinga in which thousands of Sicilian tourists who come to Sperlinga can taste the typical Sperlinghese tortone, attend the parade that was introduced in 1998 in which ladies and knights parade wearing period clothes to represent the ancient families who have owned the castle over the years and other noble families of the town. In conclusion, at the foot of the castle the narration of the Sicilian Vespers takes place first, also narrated with the representation of some legends and lastly the election of the most beautiful lady of the castles of Sicily.

In the years following the Vespers, when the Angevins who had taken refuge inside the castle were taken to Calabria, the castle was damaged by Pietro d’Aragona. A few years later, when this castle passed into the hands of the Ventimiglia family, they started the renovation, which was then continued by Giovanni Natoli in 1597 who adapted the castle to a baronial palace. In the second half of the XIX century the castle was abandoned so it fell into disrepair. In the XX century, however, much of the castle was freed of the materials accumulated after the demolition and the walls, the church and the baronial rooms were restored.

The castle then became composed of: a main staircase leading to the central corridor to which the various rooms are connected. On the east side, first of all, you can see the baronial rooms, followed by the prisoners and two rooms that were previously used as houses. In the middle part there is a corridor that leads to the so-called false door, next to the prisoners there is an extraction hood in which the work with fire was done. In the western part we find the church first, flanked by the staircase leading to the top of the castle, a slight descent that leads to the rooms below used for different purposes, such as a room containing 12 holes carved into the rock which are presumed to represent a sundial or astronomical, others think it represents a place of worship; also, on this part of the castle there is a terrace. At the foot of the castle it is possible to visit a museum containing many ancient tools, especially agricultural vehicles.

After passing into the hands of other families, in 1973 the castle was sold to the municipality of Sperlinga which still owns it today and is used only for tourist purposes, as it is visited by tourists from different parts of Italy, but above all from Sicily and sometimes by foreign tourists.

From the point of view of a Sperlinghese citizen, living at the foot of the castle, although it does not play a fundamental role in everyday life, it is equally considered lucky to have such a particular castle in our community.