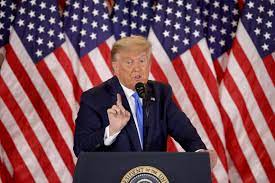 THE AMERICAN PRESIDENTIAL ELECTIONS OF 2016

As opposed to what is commonly believed, American citizens who already have 18 years old before Election Day, do not directly elect the President of the United States of America. The election process is more complex and takes longer than we would normally imagine. As stated in the American constitution, following the decision taken by the founding fathers, the US President is chosen by electors through the process of the Electoral College. The number of electors forming this institution amounts to 538 people with each state having as many electors as its number of representatives in the Congress (House and Senate). The people forming the Electoral College are the ones actually voting for the American President. This process was established as a compromise between a popular vote by citizens and a vote in Congress and it might express a different outcome from the one determined by the Popular Vote. As a case in point, this happened in 2016.

The 2016 United States presidential race had, as protagonists, Donald Trump and Mike Pence forming the “Republican ticket” against Hillary Clinton and Tim Kaine forming the “Democratic ticket”. Even though predictive models and statistics had estimated a 90% chance of the female candidate becoming the next head of the Oval Office, on Election Day, Trump surprisingly won the key swing-states whose influence proved to be crucial for the final result. Ultimately, Clinton gained 227 electoral votes while the 304 ones received by Trump awarded him the presidential nominee. Nonetheless, to have a broader and more thorough overview of the election, it is important to understand the following concepts.

What are swing states?

Nonetheless, the swing states or battlegrounds could unexpectedly give their support to either the Democratic or the Republican candidate. In light of that, the so-called safe states hold a significantly lower number of rallies and political debates compared to the other ones where the candidates competitively campaign and spread their propaganda with the purpose of gaining popular consent.

The winner-take-all method, which is used in the American elections, implicates the fact that the presidential candidate achieving the majority of votes in one state, will consequently win all of the electoral votes of that specific state. During their campaigns and public speeches, both candidates clarified their standing points regarding relevant issues such as economic strategies, immigration policies, and the like.

The presentation statement of Donald Trump’s campaign, “Make America great again”, well summarises his views on the internal economy and international policies. Following the principle of “America First”, he proposed to revive American manufacturing along with decreasing the reliance on China protecting the national economy from foreign competition. His promises on immigration mainly focused on shifting from the family-immigration phenomenon to a “merit-based” system. Instead, Hillary Clinton’s campaign mainly followed the steps previously taken by the former Head of State Obama, with wide support of minorities in the South and proposing an open immigration policy.

Regarding the economic side, she wanted to address inequalities by imposing increased taxation depending on income and wealth. Clinton’s position on the theme of energy and environment can be considered neutral with a sufficient concern for climate change as a threat to our planet. Political awareness and active participation are fundamental for the dualism right-duty in the concept of citizenship.

Following national and international elections is of paramount importance in understanding political and economic dynamics in an increasingly globally connected world where every single decision made has a consequential effect on the following events and therefore an influence on our lives. Recent events (the Russia-Ukraine conflict)  have shown how closely connected countries are despite their physical distance. The era of digitalization and globalization has broken down every sort of border, whether we like it or not, therefore being informed and involved is key.