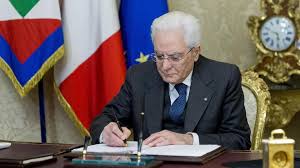 Sergio Mattarella was born in Palermo on the 23rd July 1941, into an influential Sicilian family; his father was an anti-fascist, who founded the “Christian democracy” party; his brother was the president of Sicily, but he was assassinated by “Cosa Nostra” in 1980. The death of Mattarella’s brother is one of the most dramatic events for Italy; for this reason he puts effort into the battle against Mafia.

During his life, he worked as a lecturer of law, he published several scientific research and, in the political field, he initially served terms as Minister for Education, Deputy prime Minister and Minister for defence.

On the 31st of January 2015, Sergio Mattarella was elected president of the Italian Republic with 665 votes, so he became our Head of State.

From the very first day, in which he fulfilled his office, he has always been recognized for his great sobriety and humility, as he arrived at the constitutional court by an humble car, exactly as if he were an ordinary citizen. This act, however, is considered as the first of a long series of choices and actions, which demonstrate his great firmness and above all impartiality.

“The arbiter must be and will be impartial”

These seven years have been challenging, complex and emotional;

We can recall the most important events of them:

-It’s the 8th of February 2016 when Mattarella meets Barack Obama in order to  renew  the Atlantic Alliance and the relationship between Italy and the USA;

-It’s the 16th of July of the same year when he takes part in the funerals of 23 people, who had died in an accident on a railway line;

-It’s the 27th of January 2017 when he meets the President of the Federal Republic of Germany  at the shrine of the Mausoleum of the “Fosse Ardeatine2, it is the first time that the presidents of the two countries are together in the place where the Nazis had killed 335 people in 1944;

-It’s the 25th of January 2018, when he nominates Liliana Segre senator;

-It’s the 9th of March 2020, when Italy is closed in a lockdown, due to the Coronavirus emergency.

-It’s the 2nd of June , when he visits  many hospitals to thank all the people, who had been on the frontline to fight against Covid-19.

-It’s the 9th of March, when he receives the first vaccine dose.

Sergio Mattarella’s mandate ends on the 3rd of February 2022. But the 29Th January’s vote for the election of the new President has proved to be a token of people’s appreciation for a man who has been one of the toughest Presidents in the republican history, because of all the adversities, which have damaged our lives, despite everything, Mattarella has always supported us either in difficult moments or in beautiful ones.