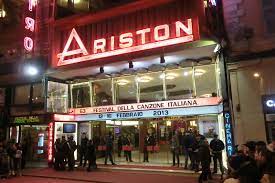 The Sanremo Music Festival is the most famous music event in Italy.

It is a singing competition among performers presenting original songs in premiere, never performed publicly before, composed by Italian authors, and voted by juries and/or by popular vote. The festival is also used as a method for choosing the Italian entry for the Eurovision Song Contest, that is inspired by the same Italian festival, each year.

Since 1951, the Sanremo Festival has been the fixed date of the Italian winter, the mirror of pop that reflects Italian society and its culture: it has always been able to change and adapt to society and to times, and so it is now rooted in the heart of every Italian.

How did it all begin?

In the aftermath of World War II, the idea came to revitalize the economy and reputation of Sanremo through an annual music festival to be held in the city. During the summer of 1950, the administrator of the Sanremo Casino, Piero Bussetti, and the conductor of the RAI orchestra, thus decided to launch a competition among previously unreleased songs. Officially titled “Festival della Canzone Italiana”, the first edition took place at the Sanremo Casino, only for three days (on 29, 30 and 31 January 1951). There were only three participants: Nilla Pizzi, Duo Fasano and Achille Togliani.

Someone after the war defined the Sanremo Festival “the great escape”,  the soundtrack of a singing Italy that faced modernity.

Since the first edition it has come a long way and many constituent elements have changed.

It is held annually in the town of Sanremo, Liguria.

How long does it last?

At the beginning it lasted just three days, then they increased it to five.

Where does it take place?

The Festival took place in the Sanremo Casino from the year of the first edition to 1976; all the editions that came later were held in the Teatro Ariston, until this year. There was only an exception in 1990, when it was held at the Nuovo Mercato dei Fiori.

How has it been transmitted?

The first editions were broadcasted live radio while, since 1955, the Festival began to go on television and since 1958 the event has been broadcasted in Eurovision.

How many singers participate?

In 1951 the participants were just three, but seventy years later, this year they became twenty-six big artists with eight new proposals, too.

This year the Festival, that finished just a few days ago, had a sad change: the spectators were not at the Ariston due to the Covid-19 restrictions.

But the event was still able to give serenity and joy to Italian families, making all those who were watching it amused.

The conductors and singers have shown great solidarity; as the co-conductor Giovanna Botteri said, in fact, they did not see the audience, but they looked at the camera and felt like all of us were there with them.

Encouraged by this feeling, Maneskin have been able to enjoy their victory with the song “Zitti e buoni’’.