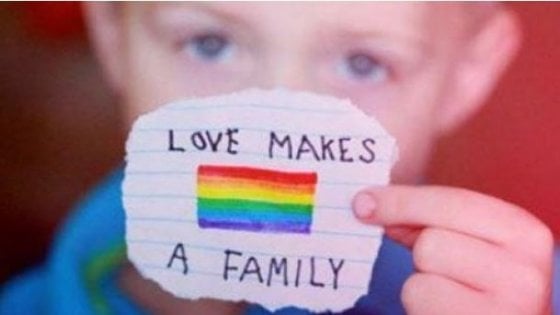 In a society like ours, is it already possible to talk about a gay family?

Perhaps the question may turn out to be rhetorical, but it is not yet clear whether our culture is already suited to incorporate certain ways of living and relating to the world. And that is not good: Italy is changing, albeit much more slowly than some Western democracies such as America, and this can only lead to clashes which, unfortunately, do not always turn into an opportunity for meeting and of exchange (especially in our country, where culture and civilization in general have been deeply influenced by Catholic thought).

It is unfortunate to think that it is therefore not possible to face a serious debate on homosexual families without falling into the increasingly dangerous trap of homophobia. The socio-cultural context in which we live is certainly not favorable: we are not a homophobic country like Russia, but we are not even an open country like Spain, to remain in Europe; we are in a middle way, which, however, still makes us one of the few states of the European Union to lag behind in terms of civil rights and more. And this is not acceptable, because all citizens are equal before the law, and, already due to the fact that everyone pays taxes to the state, they should have the same opportunities as their compatriots.

It has often been stressed by science that a child growing up in a homosexual couple is not destined to become homosexual, given that homosexuality is certainly not a transmissible existential condition; several studies have also explained that a child does not grow up badly, or worse, in a family with two fathers or two mothers. Is it right, then, to oppose the formalization of gay families, just because we have been used to conceiving the family in this way? The problem is the society in which we live: evil is in the eye of the beholder: there is no scientific value in the thesis of those who argue that a child grows up badly in a gay family, and therefore the problem is to be found in the prejudice that has caused damage and death in the history of man.

It often happens to talk to people about this issue and most of the time the perplexities that emerge are always many. Especially those on the child’s well-being, on his emotional development and on his possible lack of reference figures. We always end up wondering why this well-being is not culturally put on the same level and questioned when, for example, we are aware of disadvantaged family situations, violent fathers, superficial mothers and it is at that point that everyone’s thoughts should be turned to the psychological state of the child. Unfortunately, such episodes happen even more often than is believed, yet apart from rare cases no one doubts the parental authority or the ability to raise a child of a so-called traditional family.

What makes a family a good family and a good place to grow up, physically and emotionally, is never related to the sexuality of her parents but to the love that is passed on. The issue is certainly delicate, and the history of gay families is still to be written: the regulating principle of everything, however, cannot be prejudice, nor ignorance, especially if they start from the state, because a family with two fathers or one with two mothers will also be particular realities, but it is always mothers and fathers, whether they like it or not. It would be appropriate for each of us to be against any form of prejudice and discrimination, also supporting the right of everyone to love whoever they want to love. With all the hatred in the world, love is nothing but love, in all its forms.