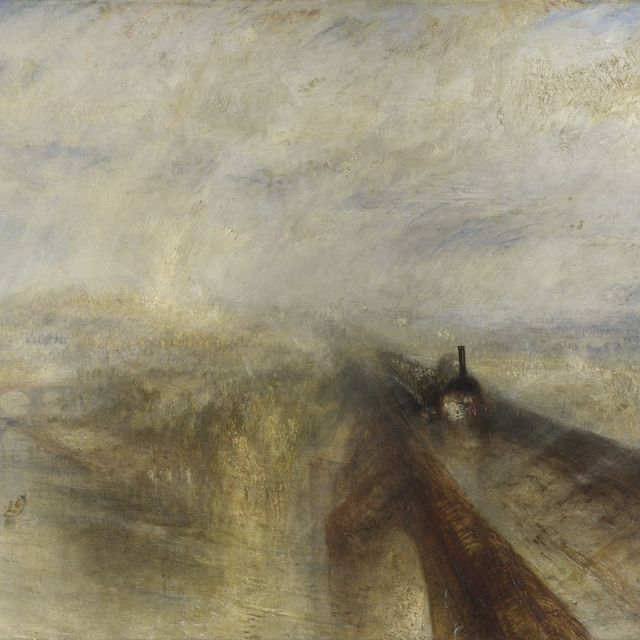 Pollution in the history of art is a visual story that begins in the nineteenth century   and continues to this day. In the paintings of the English artist Turner, the “dirty but beautiful” effect is the first testimony of the (polluted) air in contact with industrialization.  The painter  Turner was not fully aware of this, but, today, the red and green pigments that colored the skies of his paintings are the first evidence of the air pollution levels of a couple of centuries ago. At the time, little and nothing was known about pollution and, indeed, no scientist until 1829 bothered to track the harmful dust that floated in the sky. Factories were born, trains spread quickly, volcanoes exploded – as in the case of the Indonesian Tambora- originated in 1815 of 36 cubic miles of shattered rock in the atmosphere and caused, the following year, 365 days in a row without summer. It’s hard to admit, but, often, the beautifully curious sunsets we see in Turner’s paintings English artist and engraver – a bit red, a bit orange – are not the result of nature, quite the contrary.

Throughout his life, from 1775 to 1851, the intellectual found himself representing an unarmed nature before the speed of the first steam locomotives and the first fumes of factories. Just before laying the brush, he also saw Britain establish itself as the definitive symbol of colonial and industrial power. It must be said that the all-comet panorama was Turner’s favorite horizon. Today that the (almost) integrated production of the English painter is on display at Tate Britain, in the exhibition  entitled Turner’s  Modern World, it shows how attracted the artist was also to the consequences of the cucuzzoli of the trains in operation or the industrial ones on. Dirty but beautiful, perhaps the most famous work is Rain, Steam and Speed (1844) – depicting a locomotive whizzing through a British rain – and with it Turner, for the first time in art history, immortalized pollution and the symbols of maximization and progress. From that moment until today, atmospheric contamination is an integral part of artistic and literary production.

Today,  art challenges plastic pollution at sea and in rivers. There is a dull cry, a cry for help, coming from our sea and our rivers, which are increasingly suffocated by plastic. The art world has always had the social function of expressing the alarms, illnesses and anxieties of the time, and even today it knows how to grasp what is the question of this century: the pollution of the seas and rivers. The Sarno River, for example, as greenpeace has documented, is devastated by a huge amount of waste at its mouth. The Sarno is considered the most polluted river in Europe. Here hundreds of children collected plastic on the banks. An initiative carried out by the artist Nello Petrucci, always in the front row with his creations to raise awareness of the topic of plastic pollution in the seas.

Nello Petrucci is an Italian artist who, with his creations, wants to promote the defense of an environment that has been violated for too long. His work ‘Plastic River’ is an allegory of our times: a fish with plastic bags in its mouth to symbolize how much the presence of this material in marine waters is destroying fauna and flora of these environments. He  is not limited to artistic representation and organizes initiatives to take concrete action on the environment in order to clean it up. Other works include Twin Bottles in which the metaphor of plastic suffocating the sea takes the form of two huge stainless steel bottles with water on the Grand Canal. One is lucid and squeezed like a waste, on the other are imprinted photos documenting pollution in every part of the world.

The installation, in front of the Casino, is the work of the Albanian sculptor Helidon Xhixha and the young Swiss photographer Giacomo ‘Jack’, united by the passion for scuba diving. We also  remember “The Sirens hate plastic”: since  1861, the year of its invention, plastic is present on our planet. More than a century and a half has passed since then, and the exuberance of this material seems to be in everyone’s eyes. Photographer Benjamin Von  Wong started from this assumption to realize his work, a provocative photographic series that reflects on the excessive presence of plastic both at sea and on land.

Finally, we remember the mural eats the largest smog in Europe:  “Hunting Pollution”, realized with 100% natural eco-sustainable paints that purify the air.  The hand that in concrete gave life to the wonderful installation, is that of the Milanese Federico Massa, street artist of international renown, whose stage name is Iena Cruz. His  majestic  work, inaugurated in October 2018 at the Ostiense district of Rome, precisely on the façade of a building located in Via del Porto Fluviale, represents an important step forward in the fight against air pollution that grips the Lazio capital. The mural, whose surface is approximatelya thousand square meters, is made with airlite, a particular and revolutionary green paint, which has the ability to absorb many of the pollutants present in the air.