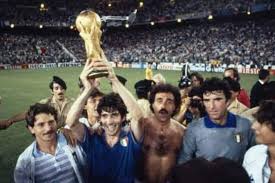 Paolo Rossi was born in Santa Lucia di Prato on 23 September 1956. He started playing football at the age of nine with Santa Lucia, a team set up by the doctor of the hamlet, Dr. Paiar; his older brother Rossano also played on the same team. He came to professional football playing in the role of right winger with Juventus; after having undergone three operations to remove the menisci, he went on loan to Como.

The turning point in his career took place with the transfer in co-ownership to Lanerossi Vicenza, where the coach Fabbri discovered his great potential as a fast and technical forward.

In fact, Paolo Rossi was very skilled in the tight spaces of the penalty area, with a great intuition for the goal, a quality that was baptized in his honour as “nose for the goal”. In the 1976-1977 season Paolo Rossi led Vicenza to promotion to Serie A team and in the following season he was the protagonist with his team of an unexpected second place in the top league.

He won the title of top goalscorer with 24 goals scored and was selected by popular acclaim by the Technical Commissioner of Italy National Team, Enzo Bearzot, to be part of the expedition to the Argentine World Cup in 1978 and once again Paolo proved to be one of the revelations of the tournament.

The following year, Vicenza relegated to Serie B and in the 1979-80 season Rossi went on loan to Perugia. Unfortunately, in this period Rossi’s image was tainted by a serious fact, that is, he was involved in the soccer-betting scandal and was disqualified for three long years, then reduced to two years following the appeal.

His disqualification ended just in view of the 1982 World Cup in Spain and Enzo Bearzot was convinced of his innocence, but that was not the point. Justice had established that he was guilty, and he paid his debt without invoking discounts. He thought about it for a long time in that winter that preceded the World Cup in Spain and even before tackling the issue in technical terms the moral problem arose but, in the end he decided that, once the disqualification was over, he would take it with him.

In fact, his summoning aroused a sensation in public opinion. In the first matches, Paolo Rossi was in the shade as was the rest of the team. Only in the final stages, he became the absolute protagonist: he scored 3 goals against Brazil, 2 goals in the semifinals against Poland and a historic goal in the final against Germany. Paolo Rossi was the top scorer of the planetary tournament. This extraordinary achievement earned him the nickname “Pablito”. Shortly thereafter he was chosen as the winner of the Golden Ball in 1982.

But July 11, 1982 arrived. The night the dream came true. The images of Dino Zoff lifting the World Cup, Marco Tardelli cheering plastically together with Antonio Cabrini and Paolo Rossi kissing the heirloom are clear in the heads of the Italians. It was the Italy of Enzo Bearzot who in Madrid won the third world championship against West Germany. The final result was 3 to 1 for the Azzurri: Rossi, Tardelli and Alessandro Altobelli scored.

Remembering that night, 35 years later – it was 2017 – Paolo Rossi said: “After 35 years I’m still at the Bernabeu ” because, he explained, “certain emotions don’t end”. He then said that his “special moment” was the first of the three goals scored against Brazil by Zico, Socrates and Falcao who seemed invincible. “That goal – said Pablito – saved me, opened my head. Up to that moment it had all been uphill for me but then Antonio’s cross arrived, a brush stroke and me in the middle of two defenders who managed to throw out the goalkeeper. A ‘computer’ goal that took all my weight off me was a liberation.

“Until the beginning of the second round of that world championship – Paolo Rossi recalled – our national team was mistreated and attacked by critics. We had to face world champion Argentina with Diego Armando Maradona and people told us that we were going to do it. That 2-1 victory made us aware of our strength, that we could fight with everyone. The 1982 team was an extraordinary group, united and cohesive just as Bearzot wanted it. We achieved victory all together, the 22 players of the team. We spent 50 days together and after gaining awareness we were a train on the way that nothing could stop”.

So, after the first goal against Brazil came two more to the Seleçao for the 3-2 final, the brace against Poland and the 1-0 that unlocked the final of the Bernabeu with Germany.

After the World Cup, Paolo Rossi returned to Italian football and played for Juventus for three years, still winning a lot: a European Cup, a Cup Winners’ Cup and an Intercontinental Cup. Then he moved to Milan and finally to Verona, where he ended his career at only 31 years old and due to the fact that his career physique had to undergo many surgeries for his multiple injuries. He died in 2020 of an incurable disease at the age of 64.