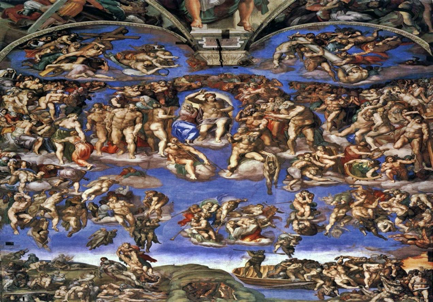 For many centuries, the idea of nudity was closely associated with pureness and successfully conveyed the connection between the sensible and emotional world. However, in recent times, the strong bond between the body and the spirit has slowly but steadily been stripped, while the modern concept of nakedness has lost the powerful and positive connotation that it once communicated.

One of the most influential artists of the Renaissance, Michelangelo, celebrated the extraordinary perfection of the human body analysing it from both physical and moral perspectives. In his incredible paintings and sculptures, physicality was the tool by which he was able to fully express himself. We can find strong evidence of this in “The Last Judgment”, a spectacular painting located in the Sistine Chapel in the Vatican. That painting allows the viewer to reflect on an important concept: being naked in front of God. Michelangelo was heavily criticized for showing naked bodies in religious contexts. However, he was quickly able to put out the fire he had started by explaining the authentic and powerful meaning behind the images. The artist stated that showing the true physical and emotional selves, human beings are undressed of all the secrets in front of God, no longer hiding as they did during their earthly lives.

The Last Judgment shows the scene of the end of the world that is strongly connected to human creation in the Genesis, as human beings are naked in both events.

As we focus on God’s will, we can assume that he did not create men with the fear of being naked, on the contrary, by creating on his own image and likeness, he was able to dress them with pureness and glory.
A synonym of temptation and evil, the serpent is responsible for creating a negative image of God inside human minds: a stingy God, who was unwilling to share the privilege of heavenly knowledge and power.
Through this, we can clearly see that nudity cannot be associated with evil. Moreover, Jesus is the living example of God’s will on men, because he came on Earth stripped of any earthly desire and died naked on the cross, giving the glory of being like God back to men. It demonstrates that nudity is not a fear or a shame, unlike many people think.

Despite that, this topic has always been faced with a lack of transparency and has been considered sensitive. The reason why nakedness has absorbed the meaning of shame is traceable on the mischief rooted in human morality. Even if showing our body has been treated as a crime for a long time, anyone should be free to dispose of its nudity in the manner he or she retains the most appropriate. Through the law, the society is called to punish distortions that mine the private dignity and to guarantee a concrete realization of what we can call the freedom of nudity.

Moreover, due to internet development, the matter has been increasing in its relevance spreading prejudice and intolerance among the society. Platforms such as Instagram, Snapchat and Facebook lead to cyberbullying and discrimination so that the action of deriding a person’s physical appearance has acquired the specific name of “body shaming”. Both men and women are attacked for their body, either for being overweight or underweight. We have created unreachable standards of beauty thanks to software, which are disguising natural beauty and hiding real people behind a screen. The recent distorted concept of nudity lost the privilege of pureness and reality, despite having such a negative impact on people’s mental and physical health.

From art and religion to the law, nudity has never been used as something negative by the people who, conversely, used it to express pureness and transparency.