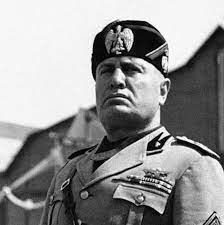 How fascism came to be

From the first post-war years, a new political regime in the form of a dictatorship was established in Italy: Fascism. The founder was Benito Mussolini, a former socialist who defined his totalitarian political design, as his goal was to establish an all-powerful state capable of controlling the social, political, and economic life of the entire country. The fascist movement was born in the meeting in Piazza San Sepolcro in Milan on 23 March 1919 with the establishment of the Italian Fasci di Combattimento.

The original program of fascism was a mixture of unionist, anti-clerical, republican, and nationalist elements; but it immediately qualified as an antisocialist movement resorting to violence through the notorious “action teams”. In November 1921 the movement became the National Fascist Party. On October 28, 1922, the Fascist militias gathered in Rome with the “March on Rome” obtaining the commission for Mussolini to form a new cabinet. Although Italy emerged victorious from World War I, it fell into a deep political and social crisis. The tragic sufferings spread the desire for political and social changes. Thus began the red biennium 1919-1920 in which several popular rebellions arose, leading to important social achievements. The peak of these riots occurred with the occupation of factories, which began in 1920 with the occupation of Fiat.

Those who were in favour of these changes were the mass parties. First of all, there was the Socialist Party, torn between dualists, reformists, and maximalists. On the far left of the PSI, there was Antonio Gramsci who during the congress of Livorno in 1921 gave birth to the Communist Party of Italy. The other large mass party was the PPI or People’s Party, born in 1919 under the leadership of the Sicilian priest Don Luigi Sturzo. At first, Mussolini formed a coalition government with nationalists, liberals, and PPI. The new Acerbo Law of 1923 abolished the proportional system in favour of a majority and in that year the PNF was the first party in Parliament. In this period several reforms were implemented, the most important was that of school in 1923, which prioritized teaching the traditional humanistic culture over technology and science.

However, following the assassination of the socialist-reformist deputy Giacomo Matteotti (10 June 1924), carried out by fascist assassins, resentment for the illegality and violence of the fascist teams grew in the country. For this reason, a protest sparked among the deputies of the opposition, the left chamber (“Secession of the Aventine”). With the support of Victor Emmanuel II, who continued to show confidence, Mussolini decided to face a sudden change, and with his speech in Parliament on 3 January 1925 he opened the dictatorial phase of his regime.

This piece of world history is essential to understand how the nations we know now came to be, and, along with other historical events, should not be overlooked. History is often deemed a useless subject, but we should know better than that.