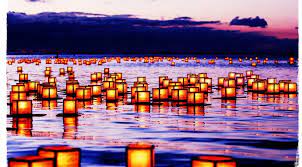 Floating Lantern is the name of a suggestive and spectacular ceremony that characterizes the coast of Hawaii.

It is quite a modern festival because it was established in 1999 by His Holiness Shinso Iti, High Priest of Shinnyo-en.

This holiday takes place in America on Remembrance Day, a day that remembers the victims who fell in war for serving the country.

The event has been taking place every year along the coast since 2002, up to Ala Moana beach, for the first 3 years the ceremony took place at the Ke’ehi lagoon on the southern shore of O’ahu.

The ceremony culminates when the sky is dotted with thousands of small floating lanterns, carrying messages and wishes, which are released into the bay at sunset. The resulting scenographic effect oscillates between mysticism and romanticism: the ceremony, in fact, aims not only to remember loved ones, but also to look to the future with more optimism. Approximately 40,000 people participate in this festival every year.

The many people present at the ceremony can choose to float their lantern, or write their own memory or prayer on a special sheet that will be placed on collective commemorative lanterns that will be launched by the volunteers.

This ceremony takes place every May 27, the beginning of the ceremony is decreed by the sound of a shell and by drummers and taiko songs.

To the crystalline sound of a bell, the paper lanterns with lights and candles inside, in which special messages are written to deceased lovers, prayers for their God, and hopes for the world and much more, are put into the water so that the tide takes away the wishes, with the hope that they will come true.

The party in which people from different parts of the world also take part, certainly represents an enchanting and magical night for those lucky enough to participate.

This tradition is very similar to lighting a candle in a Catholic church or writing a prayer on a piece of paper and then burning it while watching the smoke rise to the sky. What you ultimately get out of it is up to you, for some it boils down to faith, for others the event was just fun, or symbolic, but, for a large number of attendees, it can be something very spiritual, to the point of making them move with a few tears.

Nobody knows if the good hopes will come true, but it is certainly a good thing that man desires and believes in his dreams because it allows him to pursue them all the way, without ever giving up.