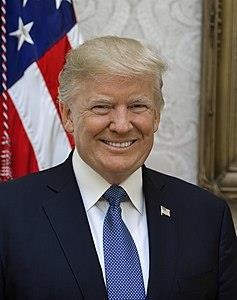 Donald Trump: the 45th US president

Donald Trump’s presidency began at noon on January 20, 2017, when, immediately after his oath, Trump became the 45th president of the United States of America, succeeding Barack Obama.

Trump, a Republican, was a wealthy entrepreneur residing in New York State at the time of his victory in the 2016 presidential election, in which he prevailed over Democratic candidate Hillary Clinton. Mike Pence, former governor of Indiana, took over the same day as vice president. At the time of his election, at the age of 70, Trump was the oldest person to become US president. The expiration of his mandate, after the election of Joe Biden, was January 20, 2021.

The elections have determined the 45th president of the United States, the successor of the Democrat Barack Obama, in office for the previous eight years, ineligible as the limit of two terms foreseen by the 22nd amendment to the American Constitution has been reached. They were held at the same time as the parliamentary elections which elected the 435 members of the House of Representatives and 34 members (one-third) of the Senate.

The electoral system provides for a semi-direct election; the president is in fact elected by an absolute majority, for a term of four years, by the Electoral College, made up of 538 electors, elected by direct election on the Tuesday following the first Monday in November of the last year of the office of the president in office. Each federated state elects a number of delegates equal to the representatives of the same state in Congress, which also takes into account the size of the population and is therefore subject to periodic review. With the exception of Maine and Nebraska, each state has jointly adopted an electoral system in which only the supporting delegates of the same candidate who have obtained the most votes are elected; the winning

candidate in the single State then wins all the delegates to it. Maine, on the other hand, and respectively since 1972 and 1996, have elected a large method per congress district, only the remaining representatives of the two states are elected on a state basis, while with a majority.

As provided in the second article of the Constitution, any citizen of the United States by birth, residing in the United States for at least fourteen years and aged 35 or over, is eligible for the office of President. Major political parties nominate their candidates using primary elections, held in all states in different ways. The two main parties, as usual, chose their respective candidates for the presidency in the summer of 2016 at the height of primary elections. The militants of the Democratic Party chose for the first time a woman, the former Secretary of State and former first lady Hillary Clinton, who could count from the early stages on the endorsement of the vast majority of the exponents of her party, however having to face up to the end of the primaries Bernie Sanders, a semi-independent candidate who achieved widespread popularity among younger voters, who presented himself as an antagonist of the financial system and a supporter of socialist policies of a Northern European mold. Joining her as the vice-presidential candidate was Timothy Michael Kaine. The Republican Party instead chose the controversial candidate Donald Trump, a wealthy entrepreneur and television personality, who was unable to bring about a consensus among the various currents and among the leading exponents of the party. On the contrary, even after the triumph resulting from the popular vote, due to his positions and his attitude, various Republican leaders refused to express support in the race for the White House, some even announcing that they would vote for other candidates. Trump chose Mike Pence, the governor of Indiana appreciated among the Republicans, as a vice-presidential candidate, thus trying to stop the disaffection of a large part of the party.

As for funding, at the end of October 2016, the Clinton campaign and the groups born in its support had reached a figure of almost 690 million dollars raised, of which 1.3 self-financed by the same candidate, while the Trump campaign had accumulated almost 307 million, of which 56 self-financed.

Considering also the other minor candidates and all those who had participated in the primary, the total amount of donations for the 2016 presidential election was about 1.3 billion dollars.

This law sanctions the birth of the Federal Election Commission, that of the PACs, and introduces the rules on the transparency of electoral campaigns: all the organizations that participate in a candidate’s campaign must continuously report, even more than once a month, their financial movements to the FEC.

In addition, it also establishes the Presidential Election Campaigning Fund, a fund created with the aim of ensuring fair participation by all candidates in the presidential campaign. In practice, every citizen has the opportunity to donate a portion of their income taxes: initially one dollar, today 3 dollars. This fund, which has grown over time, now totals around $ 300 million and covers the entire presidential campaign. It starts with the Nomination Season (the phase of the primary elections for the choice of the candidate of each side ed) in which candidates are given an amount of equal value to that collected through individual donations. Accepting public funds, however, also means having to respect a spending ceiling, set at 50 million for each candidate. The fund also covers the Convention, the national event where the name of the candidate for president is made official. In this phase, the figure of 30 million dollars is distributed between the two major parties. In the last phase, the General

election season (the actual elections ed.) Is covered by the public fund only and exclusively if the candidate decides to renounce private donations.

However, President Donald Trump had the advantage of starting his fundraising activities earlier, even before the Democrats started the primaries, and he has raised $ 596 million.

As we know, Donald Trump ran back into the 2020 election, in which he was defeated by Democratic rival Joe Biden. However, he refused to acknowledge the outcome of the voting and the opponent’s victory, announcing legal appeals for alleged fraud. On January 6, 2021, during the congressional votes that certified Biden’s victory, demonstrators loyal to Trump stormed and occupied the Capitol, leading to the suspension of the session and the evacuation of the structure. Following the events on Capitol Hill, on January 13 he was again indicted for “inciting an insurrection”, becoming the only president in the history of the country to have been subjected to two impeachment procedures.

Subsequently, he continued to exert predominant influence within the Republican Party, the majority of which favored him to compete in the presidential election of 2024.

Several newspapers, including CBS News, place him among the worst presidents in the history of the United States of America.