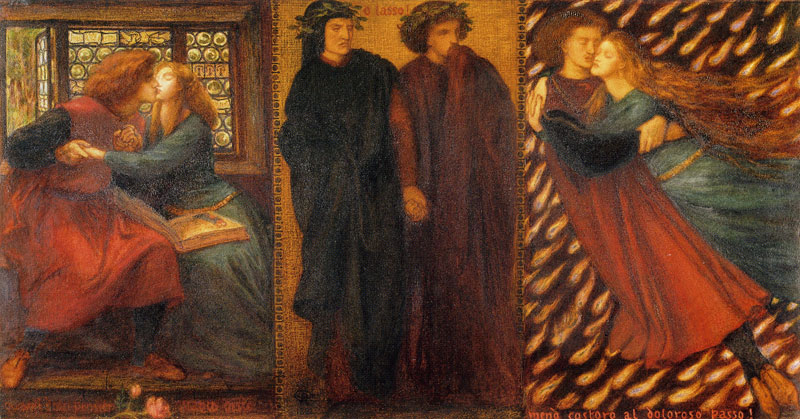 The Divine Comedy is a literary masterpiece written by the genie of Dante Alighieri in the first half of the 14th century. The Comedy symbolizes humankind’s journey to redemption through the three afterlife kingdoms: Inferno, Purgatory, and Paradise

Through his journey in the ‘infernal burella’, Dante tells the story of many political and religious figures, who – blinded by political ambition – committed murders, treason, and suicide all in the name of ‘worldly power’.

In the Canto V Dante descends into the second circle, whereby analogy, the “carnal sinners” are punished, that is, those who in life let themselves be overwhelmed by passions: the lustful. In particular, Dante is struck by two souls, those of Paolo and Francesca, for their lightness and because they always proceed side by side.

Francesca from Rimini was a beautiful noble girl, destined to become a nun, but she was forced to marry the violent Gianciotto Malatesta, Paolo’s older brother. While living together, Paolo and Francesca fell in love. Unfortunately, the brother discovered their affair and killed the two lovers, condemning his brother and his wife to an eternity in Hell. Nevertheless, Paolo and Francesca’s sin becomes secondary to the readers because what really matters is that their life was brutally interrupted. Canto V is the testimony of Dante’s powerful narrative technique that triggers empathy in the readers.

The poet doesn’t forgive their sins, because he knows well that the two lovers have committed an act that goes against the principles of morality, but at the same time, he feels compassion. He recognizes in the young woman’s words typical traits of courtly love because it is not a sin to love a person as long as love remains an abstract thing and remains a feeling. He understands how much, despite being punished, desire still holds them together forever. We can see it in line 112 “Oh how many sweet thoughts, how much desire these men took to the painful step!”.

In the dialogue with Dante, through her expressions, Francesca shows a human sensitivity with traits of noble gratitude and humility, despite eternal damnation. In fact, she alludes to the fact that she would have gladly prayed for Dante’s salvation, the only one who understands why they were damned if only God was by her side. She is a figure in sharp contrast to all other damned souls: they express their suffering with cries and moans while she is sweet and has a calm tone, despite the fact that she suffers a lot like the others.