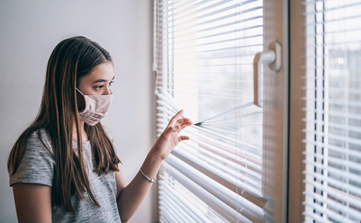 It was March 9, 2020, I had just come home from my usual Monday afternoon Spanish class, unaware that it would be my last.

I turn on the TV to see if there is any news about a certain coronavirus, still almost completely unknown in Italy but already widespread in China.

I never watch the news outside of lunch and dinner but I was curious to know something more about this strange virus that had made so much talk about itself.

Sudden, unexpected and unthinkable news, the first nationwide lockdown had been

announced and my whole life had just been limited by strict and drastic rules that I never thought I would abide by.

No more hanging out with friends, no more training and competitions, no more school…From one moment to the next I was robbed of my entire life.

How would you have felt?

At first, I’ll be honest, I was really happy to have a few weeks off from school but this happiness vanished soon after.

The next few days were spent locked in my room, often staring into space or listening to the television that did nothing but talk about this health emergency.

I was forced to stay closed in the house when in that same period I should have left for the most important competition of the year: the Italian championships. Suddenly months of hard training, great sacrifices, and much more had been canceled, there was no greater disappointment. All relationships were reduced to a simple call, video call, or a trivial message on WhatsApp; no more hugs, kisses, family lunches, or aperitifs with friends.

My day started in my pajamas and ended the same way. Every day was the same as the one before, but how much longer would I have to endure living that monotony?

“It’s going to be okay” they shouted it from the balconies, wrote it on social media, and even said it on the news.

It’s been weeks, months, years and we’re still fighting this tough battle that in my opinion

seems like it will never end. I was told that these would be the best years of my life, the years of going crazy with my friends, partying until dawn, having fun without limits, but instead, there was also a curfew that had to be respected.

A real nightmare for us teenagers! No article nor words can explain our state of mind during these years.

The worst turned out to be the moment when the illusion of communication media vanished, the moment we realized that messages, calls, or video calls cannot replace direct contact.

It was at that very moment that most adolescents began to suffer the consequences of isolation, distancing and all the restrictions imposed. As some statistics show, panic attacks, anxiety and depression have greatly increased among adolescents, and we cannot allow this to continue to happen!

After almost three years we have reached the limit of endurance, we have almost gotten used to living in this monotony but we want back those famous “best years” that we should have lived.

This pandemic has taken away our dearest people, has taught us not to take anything for granted even the most trivial things like hugs or kisses, has taught us the true value of life and how to live it to the fullest, that every minute should be lived and that time is money.

I hope to have the strength to take back my life, to be brave, and to face my future with my head held high without ever again having the fear that I had during these years.