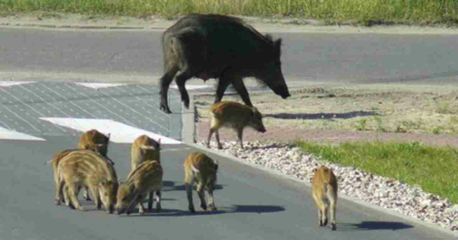 ANIMALS GO DOWN TO THE CITIES.

On social media we can frequently read the news of wild animals in the city, which give a more surreal flavour to the current pandemic situation. But why do animals enter cities? Are they a novelty brought by COVID-19 or do we notice them more? There are many Italian cities that are becoming populated with wild animals.

Starting from Rome, the presence of different species of wildlife is facilitaded by the large number of parks and from the Tevere and Aniene rivers. Every year, five thousand wild specimens are recovered in the capital and reported in nature.

In Genoa the wild boars spread panic, in fact many specimens are sighted in the neighborhoods of the city causing some accidents. The commissioner for agriculture, Stefano Mai, feared the risk could become an issue of public order, so as to affirm that in the future they might be forced to kill them.

In Florence, the increased species are those related to the Tuscan forest. In particular, the boar and the roe deer, but also the wolf. At the gates of the city it is possible to see foxes and peregrine falcons.

The province of Mantua is also very populated, a condition due to different factors, for example the longest hydraulic network in the region, the presence of moist soils and there are also many food sources derived from intense agricultural activity.

In 2001 the ecologist John Laundrè and his collaborators coined the term “landscape of fear”, a model which allows similar animals use the space not just based on enviromental characteristics, but also based on the perceived danger. Practically, the animals build a mind map to evaluate the benefits of moving. For example, they choose where it is convenient to eat so as not to be eaten by others. Most wild animals search in all ways to avoid a close encounter with men; they do this by avoiding the places we frequent. Most diurnal species of mammals become nocturnal, as revealed by a study published in Science.

The cities are preferred by animals for the milder climate, especially in winter, for the variety of habitats, for example parks, gardens, rivers, etc. and for the security, in fact hunting is prohibited and predators are scarce. In this period, with the reduction of our movements, many of these barriers have become surmountable, and the animals have begun to move during the day, which has become quiet like the night. Some animals live among us in towns and cities, but they go out at night, or in less frequented places, and in fact we do not notice their presence.

Now we could say that have come out!