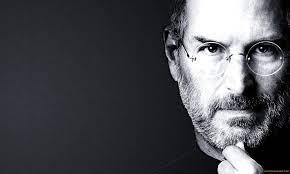 AN IMAGINARY INTERVIEW WITH STEVE JOBS: FROM RAGS TO RICHES.

Steven Paul Jobs, better known as Steve Jobs (1955-2011) was one of the greatest US entrepreneurs, founder of Apple and inventor of numerous successful products such as iMac, iPod, iPhone and iPad.

Let’s get to know this extraordinary and revolutionary figure a little better.
You can think: “How could we do that? It’s impossible, he’s (unfortunately) dead!”
It’s easier than you can imagine: in fact, it was enough for me to gather the most important information about him to create this imaginary interview that will help all of you readers to get to know some side of him that was previously unknown to you.

1) Hi Steve, I’ve always wondered, how did you manage to create one of the greatest innovations in the world starting from your garage?

“Hello! Well, I think the only way to be able to grow up in your job is to love what you do. If you have not yet found what is right for you, keep looking, do not stop, as it happens with matters of the heart, you will know you have found it as soon as you have it in front of you. And, like a love story, it will get better and better as the years go by. You keep looking, until one day you will be able to find it. Don’t settle for it. Be hungry. Be crazy.”

2) So, speaking of this, what is it that “made you fall in love” with electronics?

“It is a question that brings me back to a memory of when I was a child.

My passion was transmitted to me by a neighbor who enjoyed playing with amplifiers, TVs and two-way radios. He was very noisy and we often had to call him back, but now I am indebted to his cackles!”

3) Oh, I didn’t expect that! I’m sure another one of your anecdotes is hidden behind the apple symbol. Do you want to tell us about it?

“Oh yes, there is anecdote, but it may not meet the expectations of those who believe it is due to the Turing story. It was the most famous computer scientist of all time, who committed suicide by eating a poisoned apple (a bit like Snow White, but unfortunately without a happy ending) because he was persecuted because of his homosexuality. Legend has it that the place took on the appearance of an apple to pay homage to it. But, as I said, it’s just an urban legend.

In reality the name was chosen at a time when I was doing one of my “fruitarian diets” (yes, I was a little weird when I was young). Returning from an orchard, I decided that the name “apple” was funny, witty and not at all intimidating. In short, both in the name and in the Apple logo there is very little that is politically committed: it is just what I think had the best chance of gaining a hold on the market. Of course it would have been more suggestive to tell you that the Turing story was true, but alas it is not so.”

4) With you the surprises never end! I appreciate the sincerity. And, what was your first invention since you created your little business in the garage?

“It is not just my invention, we must not forget Steve Wazniack, with whom I have shared many projects and many ideas (in addition to the name). Our first creation, Apple I, was a computer made up of few components, therefore quite cheap. It had some innovative features for the time: first of all it could be connected to a TV, plus it had a memory system (rom) that made it easier to switch on, a critical phase for computers at the time. Two hundred were sold, if I remember correctly.”

5) Not a bad start! And what about the invention which led you to success?

“Undoubtedly with the launch of the Macintosh, the first computer controlled, as well as with the keyboard, with a new and curious device that was renamed mouse. I remember that prices skyrocketed, it was in that moment that I understood what I had managed to achieve with my passion and my diligence.”

6) Have you always invested everything in your projects: money, time, energy? Why so much dedication?

“I am certainly not interested in wealth, this is not the main purpose of my efforts. Going to bed at night knowing that I and all those who support me and work for progress have done something wonderful… that interests me.”

7) You are truly a great source of inspiration, especially for young people. Would you like to tell our young readers something encouraging?

“Our time is limited, so we don’t have to waste it living someone else’s life. Let’s not live according to the results of other people’s thinking. Let’s not let the noise of other people’s opinions cloud our inner voice. And most important of all, we must have the courage to follow our heart and intuition. Somehow, they know what we really want to become. Everything else is secondary.”

8) And to conclude, what would you say to entrepreneurs who at any moment could lead to enormous technological progress, as you did?

“Let’s start inventing tomorrow instead of worrying about what happened yesterday.”

Steve has been a tremendous source of inspiration with his mind-blowing life story, and although he’s no longer with us we know he lived through every moment of his life to the full. We will follow his advice and, who knows, maybe one day we too will revolutionize the world.