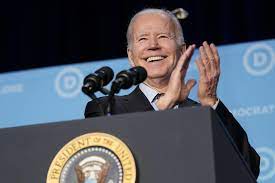 A Pledge To Bring America Together

In his first bid, for the 1988 Democratic nomination, Biden had a high-profile leadership role as the backdrop to his campaign. As Senate Judiciary Committee chairman, he was set to preside over the Supreme Court confirmation hearings of Robert Bork, starting on September 15, 1987. It was also discovered that Biden had claimed to have finished in the top half of his law school class when he was 76 out of 85 classmates. Having announced his candidacy for president on June 9, 1987, he dropped out of the race on September 23. In 1988, Biden suffered two aneurysms, which were repaired surgically.

On January 31, 2007, Biden launched his run for the 2008 presidency. But, on the same day, the media reported that he had described another candidate, Barack Obama, as “the first sort of mainstream African American who is articulate and bright and clean.” Reporters dug up other instances unrelated to Obama when Biden’s casual comments had sounded racially insensitive. His campaign never recovered.

Biden’s run for the presidency in 2020 looked similarly doomed at the outset. He entered the race on April 25, 2019, declaring: “We are in the battle for the soul of this nation.” He cited as his motivation President Trump’s reaction to the white supremacist march in Charlottesville, Virginia, in 2017, when Trump asserted there were “very fine people on both sides.” He presented himself as the candidate who could rid the country of the divisive Trump and work to heal political polarization.

Biden, whose chances for the nomination appeared to be fading, threw all his hopes on the South Carolina primary, the first in a series of states where African American voters played a significant role. He captured 48.6 percent of the vote in South Carolina, decisively beating Sanders who tallied 19.8 percent, marking a startling turnaround for the former vice president. One of his major promises was centered on vaccination because he became the president during the pandemic:

Biden’s promise: “My team will be able to get at least 100 million vaccinations done in my first 100 days,” he said on Dec. 8. After that goal was met, he raised the promise on March 25 to 200 million doses in his first 100 days, saying: “I’m setting a second goal, and that is: We will, by my 100th day in office, have administered 200 million shots in people’s arms.”

The Democratic National Convention, held August 17 to 20, was unlike any other due to restrictions imposed by the coronavirus pandemic.  Biden painted Trump and his response to the pandemic in simple, stark terms.  “Our current president,” he said, “has failed in his most basic duty to this nation. He failed to protect us. He failed to protect America.”

Because of the pandemic, many Americans voted early and by mail, prompting President Trump to assert that the outcome may be compromised by fraud. On election night, November 3, early returns based on voters who showed up at the polls that day—a large majority of them Republicans—indicated a lead for Trump. At around 2:30 a.m., Trump said falsely that he had won the election and demanded that all vote-counting stop. It took several days for all the votes to be counted, including the early ballots and mail-in ballots which were dominated by Democrats. On November 7, 2020, the major news networks and the Associated Press declared Biden the winner. Harris became the first woman, the first Black, and the first Asian American woman to become vice president. The turnout among eligible voters was the highest in 120 years: 66.2 of eligible voters cast ballots, surpassed only by the election of 1900 when 73.7 percent voted. Trump continued to cry fraud, launched dozens of legal challenges with little effect, until finally the Electoral College met on December 14 and ratified Biden’s victory on November 3 with a solid majority of 306 electoral votes to Trump’s 232 votes. Biden collected 81 million votes overall, 7 million more than Trump’s 74 million. Despite his clear defeat in the popular vote and the Electoral College, Trump continued to claim falsely that he had won the election and that the voting was fraudulent.

After years of erratic policy decisions under President Trump, Biden aimed to bring a state of normalcy to US foreign policy, rejoin treaties and alliances the previous administration abandoned, and restore the county’s standing in the world.