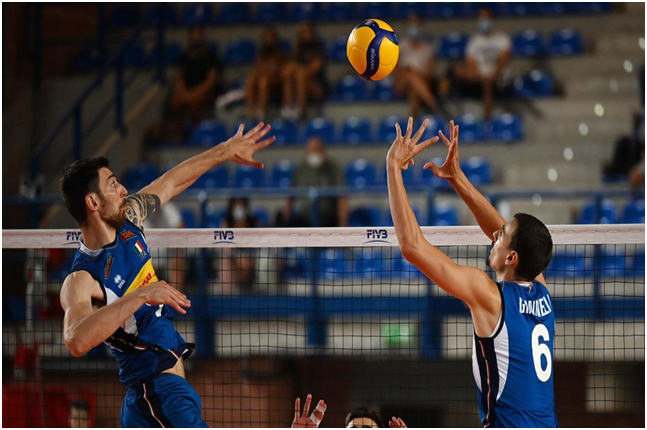 Volleyball is a team sport, which takes place between two teams with six players on the field, and another six on the bench for each of the teams. The object of the game is to score points, making sure that the ball touches the ground in the opponent’s court, and to prevent the opposing team from doing the same.

Volleyball has been on the Summer Olympic Games program since 1964 and is one of the most popular sports.

It is played on a rectangular-shaped field of 18 × 9 m, divided into two square halves of 9 × 9 m, each of which is assigned to one of the two teams. In the center, along the entire width, there is a net, 2.43 m high in men’s volleyball and 2.24 m in women’s volleyball. Each team is made up of a maximum of 12 players, of which 6 are owners; one or two further players (but only one present on the playing court) may be designated as free, who has the right to temporarily replace a defender without limitation on the number of substitutions. In Italy and for some international competitions it is allowed to register up to 14 athletes, including two free ones. Each team has a maximum of three touches available to send the ball to the opposite court. Players cannot block, throw or hold the ball, which can only be played with clear touches with any part of the body. It is not possible to double tap: it would be a foul resulting in a point to the opposing team.

The game is divided into sets: a team wins the victory of a set upon reaching the twenty-fifth point, as long as it has at least two points of advantage; otherwise, the set continues until one of the two teams has the necessary two points advantage. The team, which is the first to win three sets, ends the game and wins. The eventual fifth set (called in jargon the tie break officially decisive set) ends when the 15th point is reached, always with the advantage of at least two points over the opposing team

There are 5 roles in the team: opposite, central, hitter, setter and free. All players should preferably have a tall stature, which is a fundamental element for attacking positions; a good muscular structure, which must be strong but light, to guarantee the player to move quickly and always be effective on the pitch. Finally, every volleyball player must have a good alertness and an excellent harmony with teammates.