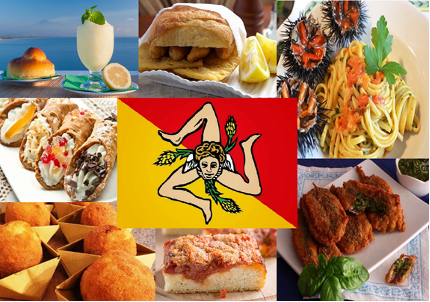 TYPICAL SICILIAN CUISINE AS A HERITAGE OF CULTURES AND A GALLERY FLAVOURS AND COLOURS.

Sicilian cuisine is the expression of the culinary art developed in Sicily since ancient times and is closely linked to the historical, cultural and religious events of this mysterious and amazing island. Starting from the Ancient Greece, a very specific style of culinary habits had been developing in Sicily and over the centuries has been enriched with new flavours and new dishes, following the historical vicissitudes of the Mediterranean island.

Therefore, it is a regional gastronomic culture that shows traces and contributions from all the cultures that have settled in Sicily in over the last two millennia, handed down from generation to generation. Although its cuisine has a lot in common with the Italian one, Sicilian food also has Spanish, Greek and Arab influences and can be considered as a unique heritage.

Now let’s start to go through some of the best traditional Sicilian dishes, expression of a rich, imaginative and refined gastronomic culture! 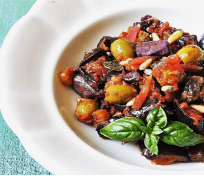 The starters are an important and fundamental aspect of the Sicilian cuisine and include tasty dishes like “Caponata”, consisting of chopped fried eggplant and other vegetables in an agrodolce sauce; “Parmigiana”, made with slices of aubergine, tomato sauce, basil, and grated Parmesan cheese; “Bruschetta”, sliced Italian bread rubbed with fresh garlic, drizzled with olive oil, sprinkled with salt, toasted until golden and lightly crispy; “Nunnata” refers to just born sardines, anchovies or mackerel and “Sarde Beccafico” a specialty based on sardines filled with sultanas, parsley, pine nuts and anchovies. 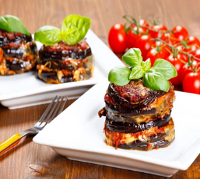 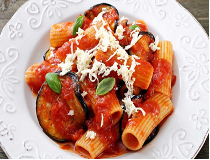 The traditional Sicilian menu includesa first course especially based on pasta. The most famous dish is pasta “alla Norma” that is usually made with eggplants, tomatoes and salted ricotta cheese. On this Mediterranean island it is also possible to taste a good plate of “Pasta alla palermitana” that is spaghetti served with freshly caught and breaded sardines, saffron, a hint of fennel and a dash of pine nuts. 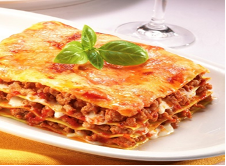 Moreover, especially on Sundays, cannot be missing on a typical Sicilian table “Cannelloni”, “Lasagna” and “Pasta al Forno” other common typical dishes made with tubes, flats or different shapes of pasta oven-backed, usually filled with cheese, meat and covered with tomato sauce. Pasta is the quintessence of Italian tradition, something you cannot miss if you come over. 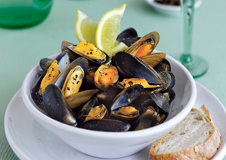 After the pasta, a typical Sicilian menu continues with a main dish based on meat or fish. And beware of refusing to complete your meal: Sicilian mamas are very strict when it is about food, you MUST eat everything and if you want to stay lighter…eat it with no bread! Main dishes are based on seafood are “Couscous al pesce” and “Stoccafisso”(dried cod) or “Pesce spada a ghiotta” (Swordfish). Sicilian cuisine offers many other delights such as “Impepata di cozze” made with mussels, pepper and lemon juice; “Calamari ripieni” that are oven-baked squid and “Involtini di pesce spada” that consist in swordfish rolls. 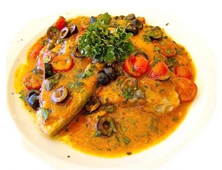 As regards main dishes based on meat we can find “Farsu magru”, “Braciolette”, based on typical beefs of Messina city, prepared with slices of meat rolled up to form cylinders and once closed they are skewered into wooden sticks and then cooked on the grill; “Coniglio in agrodolce”, “Spezzatino di vitello con patate e piselli”. 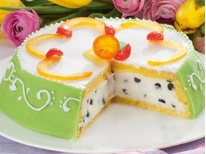 And you cannot conclude without the traditional Sicilian desserts: completeness is all! The Sicilian pastry was deeply influenced by the Arab candymakers in the 9th century. Sicily is a gallery of colours and flavours, coming from different parts of the world, re-interpreted in a peculiar way. “Frutta martorana” are traditional marzipan sweets, in the form of fruits and vegetables from the provinces of Palermo and Messina; “Pignolata” is a soft pastry, covered in chocolate and lemon-flavoured syrup/icing, which originated in the city of Messina; “Cannoli” are pastries consisting of tube-shaped shells of fried pastry dough, filled with a sweet, creamy filling containing ricotta cheese; “Granita” is a semi-frozen dessert made from sugar, water and various flavorings that represents a real ritual, especially in the city of Messina; “Cassata siciliana” consists of round sponge cake moistened with fruit juices or liqueur and layered with ricotta cheese and candied fruit..

And finally if you are still hungry…. Street food 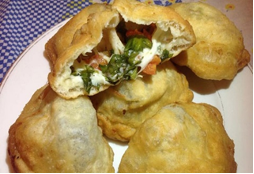 In Sicily there is also an old tradition of street food and rotisserie. “Rice balls” is how “Arancini” are famous abroad. They are stuffed rice cones, inspired by the shape of volcano Etna, which are coated with breadcrumbs and fried.

Through Palermo’s main markets it is possible to find “Pani ca’ meusa”, a soft bread topped with sesame, stuffed with chopped veal lung and spleen that have been boiled and then fried in lard;

“Pane e panelle” are fritters made from chickpea flour and other ingredients often eaten between slices of bread or on a roll, like a sandwich;

And last but not least, in the city of Messina, “Focaccia alla Messinese” and “Pitoni” are very popular. The first one is a particular pizza prepared with escarole, Sicilian tuma cheese, salted anchovies and the tomato in shell. The second one is a kind of calzone made from a thin and puffed dough stuffed with stringy curly endive, cheese, tomato and anchovies and black pepper. 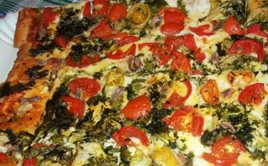