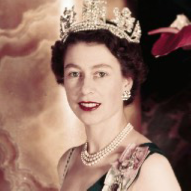 history, becoming a much loved and respected figure across the globe.

monarch, undertaking many historic overseas visits. Known for her sense

of duty and her devotion to a life of service, she has been an important

figure for the UK and the Commonwealth during times of

Her Majesty continues to carry out a full program of engagements, from

visits to charities and schools, to hosting visiting Heads of State, to

leading the nation in Remembrance and celebratory events, all

supported by other members of the Royal Family.

important elements of her work. The Queen has links  as Royal Patron

or President  with over 600 charities, military associations, professional

bodies and public service organizations. These vary from wellestablished

international charities to smaller bodies working in a

specialist area or on a local basis only.

Her patronages and charities cover a wide range of issues, from

opportunities for young people to the preservation of wildlife and the

environment. Having Her Majesty as Royal patron or president provides

vital publicity for the work of these organisations, and allows their

enormous achievements and contributions to society to be recognised.

Her Majesty supports and encourages achievement in all walks of life

through the annual programme of Investitures (at which she presents

members of the general public with their honours), Garden Parties,

receptions and other awards given in her name, which allow her to say

The Queen carries out her task against the backdrop of an equally rich private life that has seen her become a mother four times , welcome grandchildren, and now great-grandchildren to the Royal Family.

during her reign, while  other members of the Royal Family continue to

offer vital support through their work in the UK and overseas.

She is an icon on the world stage. What is even more surprising is her incredible vitality and her ability to lead her kingdom impeccably for over 60 years.