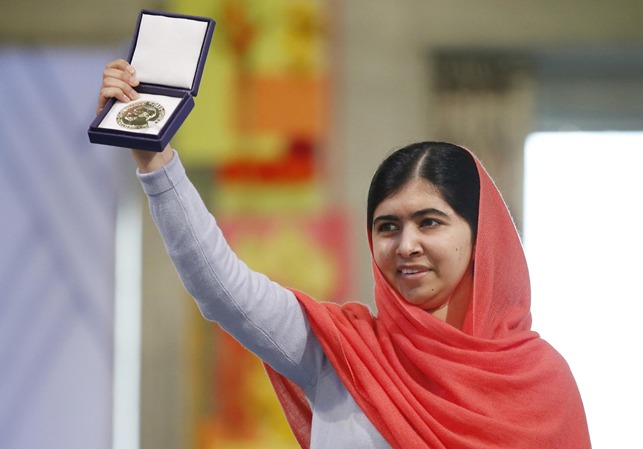 Malala Yousafzai was born in the Swat Valley, in Pakistan. Many children in Pakistan cannot go to school, especially if they are girls, but Malala’s father thought that education was very important and he ran a school.

When Malala was about 12 years old, the Taliban took control of the Swat Valley. They did not want girls to go to school and they closed many schools. Malala started writing a blog for the BBC but she did not use her real name. She wrote about life in her town and she said that she was afraid her school would be shut down.

In 2011, Malala received the National Youth Peace Prize in Pakistan. She was becoming famous and the Taliban decided to try to kill her, even though she was still a child. On 9 October 2012, Malala and her friends were on the school bus on their way home from school.

A gunman came on to the bus and asked which girl was Malala. Then he shot her in the head. Two of her friends were also injured. Malala survived but she was very badly hurt. She went to hospital in Pakistan and then she was flown to a hospital in the UK. She had to stay in hospital for over two months.

People all around the world were very shocked that the Taliban tried to kill a 15-year-old girl, just because she spoke out for education. Many people supported Malala and thought she was very brave and she became a symbol of children’s right to education.

After she left hospital Malala started going to school in the UK, but she was also even more determined to fight for children’s rights to go to school. She was now famous and on her 16th birthday she made a speech to the United Nations Youth Assembly.

In December 2014, Malala was the youngest person ever to receive the Nobel Peace Prize for her work ‘for the right of all children to education’. She used her prize money to build a secondary school for girls in Pakistan and continued campaigning for education for all children.

She celebrated her 18th birthday by opening a school for Syrian girls in a refugee camp in Lebanon. Malala then went on to study for a degree in Philosophy, Politics and Economics at the University of Oxford, UK.

Malala reminds me that there are millions of girls and women without that luxury, and if we can do so must use our voices to make sure that those who are silenced can be heard.

Her bravery encourages me to be bolder and her refusal to give in to fear reminds me that I should do the same. Despite her many achievements, awards and fame Malala always speaks and acts with kindness, grace and humility and it’s a quality I admire.