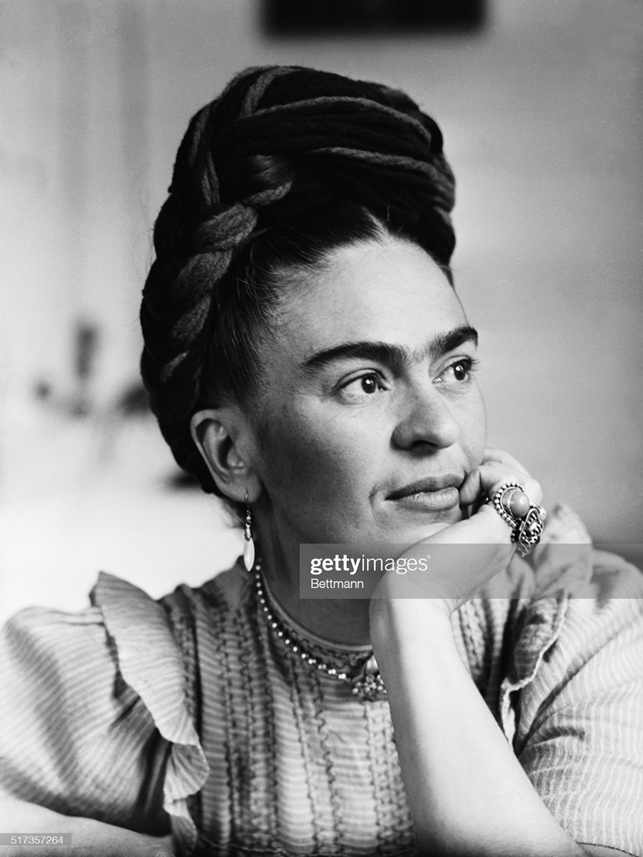 very fascinating: a life of constant suffering that has managed to convey and depict through her

greatest passion: art. What made this painter an icon was her stubbornness, that of a woman who in the first half of the twentieth century took steps towards true independence. Frida Kahlo was much more than an artist: she became an icon. A symbol of strength and will that even today everyone celebrates with exhibitions, songs, parades.

THIS TEXT HAS BEEN COPIED

Frida Kahlo is considered one of the most important Mexican painters. Many include her among

the artists linked to the surrealist movement, but you will never confirm your adherence to this

Since she was a child she immediately showed a strong character, passionate, combined with a

talent and skills out of the norm.

A REAL HYMN TO LIFE !

Frida Kahlo is an example of pure energy: she was a woman who was able to impose her art and her thought, fascinating everyone who met her, but always remaining true to herself. He loved and suffered, he lived with pain, with that broken body, with his soul torn by tiredness and made art of great emotional impact. In 1953, under the threat of gangrene, her right leg was amputated. Yet his last painting, executed eight days before he died, is an extreme homage paid to life: Viva la vida. It portrays watermelons with juicy pulp that stand out, green and red, on a blue sky. The

watermelons have the appearance of being very appetizing and rich in taste, as rich and intense was his life: an incitement, a kind of statement, a hymn to life, which despite physical and psychic pain, has never renounced to live to the full.

THE COLORS AGAINST MASCULINISM

Frida Kahlo has become an icon because she is a mirror, she has always looked at and represented

herself with a raw immediacy, constantly questioning herself: Frida is us. Or maybe we should be

Frida. She lived the world, she disrupted its surface with the force of colors, those of her clothes, in the first place. He almost always wore tehuana, the matriarchal costume from the Tehuantepec area of Mexico. A link with indigenous culture, but also a challenge against capitalist society and male chauvinism. His “armor” was composed of large skirts, rich embroidery, flowers and butterflies in the hair, elaborate braids, pre-columbian jewelry.

THE BEAUTY THAT COMES FROM PAIN

Painting becomes a way to survive, but Frida Kahlo does not portray only herself. With her art she

A strong, tenacious woman, a real fighter, an example to follow: she had the extreme awareness that pain is always survived, and she thought it was necessary to shape and transform this strong evil into something wonderful.

THE COURAGE TO BE ONESELF

America immediately fell in love with Frida Kahlo as well as Clare Boothe Luce, the director of

Vanity Fair, and to follow also Vogue America. Since 1937, when it appears on Vogue, the world

has never stopped celebrating it: they called it “ a ribbon around a bomb ”. Through the

“indigenous Mexican” style, Frida expresses the freedom to be herself, a woman who lives without

masks. This is a freedom that women have had to learn to desire and that they have not always had.

By Frida Kahlo you can appreciate the authentic beauty, natural and unspoilt. The eyebrows and

the down of the moustache contrast with the traditional aesthetic canons. The sensuality of its

strength is a fact: the strength and the will to express itself without alterations are the sexiest things there are. Frida had the ability to look “ in the room ” without ever looking down.

A WOMAN IN POLITICS

Frida Kahlo closer to the feminist movement. Frida and politics have become one since her

adolescence when, at the age of 13, she became part of the communist youth.

their place in politics and in asserting their ideas and rights.

contributed to the emancipation of women, in an era and in a country where the role of the

woman was of submission and obedience to her husband and family. In 1952 he wrote:

“ I hope, with my painting, to be worthy of the people I belong to and the ideas that give me

strength. I want my work to be a contribution to the people’s struggle for peace and freedom. ”

“ I was born with a revolution. Let’s face it. It is in that fire that I was born, ready to the impetus of

revolt until the moment of seeing the day. The day was hot. It inflamed me for the rest of my life.

The Teachings of Frida Kahlo

– In love you can be very happy but suffer with as much strength.

– You have to go against any convention.

– We need to love ourselves above all else.

– You always have to be yourself.

– Power to women: she supported him in a historical period in which male chauvinism was

somehow correspond to the social phenomena of our present: resilience, independence as a woman and artist and political commitment today make it increasingly a symbol at the international level.