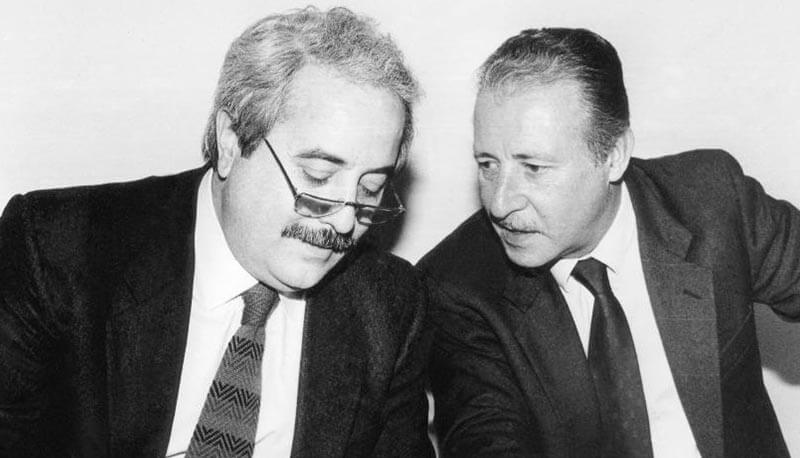 Thirty years in memory of Falcone and Borsellino

On the occasion of the 30th anniversary, which took place this year, from the Capaci massacre, we were able to find a meaningful article from “LiveSicilia” that we would like to write about today.  Where to start then?  Precisely from the conscious feeling that overwhelmed everyone in the summer of ’92, from that invincible pain.  Giovanni Falcone and Paolo Borsellino died of the mafia, not from a road accident or from an illness.  Because of the mafia, they did not have one more day of a life filled with love, generosity and a spirit of service.  This no one will ever forget.

On a hot Saturday in May, at 5:56 pm, an explosion rips open the highway that connects the Punta Raisi airport to Palermo, near the exit for Capaci: 5 tons of TNT destroy one hundred meters of asphalt and literally make flying armoured cars. Giovanni Falcone, magistrate symbol of the anti-mafia fight, dies. It is May 23, 1992.

July 19, 57 days later. The magistrate Paolo Borsellino, engaged with Falcone in the fight against the gangs, goes to visit his mother in via Mariano D’Amelio, in Palermo. At 4:58 pm another terrible explosion: this time in the heart of the city. The scene that presents itself to the rescuers is devastating.

The lives of Giovanni Falcone and Paolo Borsellino are intertwined from the beginning. Both were born in Palermo: Giovanni on May 20th, 1939, Paolo 8 months later, on January 19th. And both grew up in the Kalsa, the ancient quarter of Arab origin in Palermo, an area of professors, traders and exponents of the middle class. They lived a few tens of meters away from each other and were friends since childhood.

“The existence that develops, after such a catastrophe, in the experience of those who have experienced it, in the narrative that is handed down to those who were not there, is inevitably conditioned.”

This sentence found in the article makes us reflect a lot, each of us knows this story, whether it is small or large, many of us have manifested in these years of school so as not to forget how many brilliant lives the Mafia has taken away from us. But today is there really someone willing to give their life to carry on the great work started by Falcone and Borsellino, as they did?