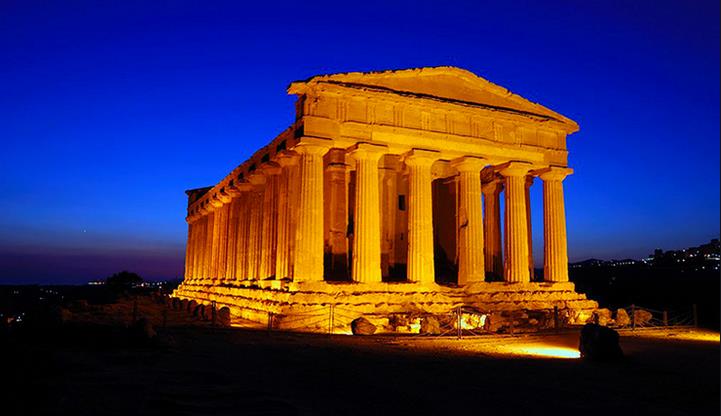 THE VALLEY OF THE TEMPLES.

The Valley of the Temples is an archaeological park in Sicily characterized by an exceptional state of conservation and a series of important Doric temples from the Hellenic period. Since 1997 the entire area has been included in the UNESCO World Heritage List. It is considered a popular tourist destination, as well as being the symbol of the city and one of the main ones on the island. The archaeological park of the Valley of the Temples is one of the largest archaeological sites in the Mediterranean.

The ancient city of Akragas, immersed in an agricultural landscape of extraordinary beauty where centenary olive and almond trees stand out, was one of the most important Greek colonies in Sicily, founded in 581 BC. by settlers from Gela, originally from the islands of Crete and Rhodes.

The plateau that lent itself well to the construction of the town was naturally protected to the north by the Rupe Atenea and the Colle of Girgenti and to the south by the long Hill of the Temples, bordered on the sides by the Akgras and Hypsas rivers.

In the 5th century BC Akragas experienced a phase of military expansion, particularly relevant at the time of the tyrant Terone (488-473 BC), and the victory over the Carthaginians. During this period, the great temples were erected which testify the importance and prosperity of the city. In 406 BC the siege of Agrigento by the Carthaginians, which lasted more than eight months, put an end to the city’s splendor, starting a long period of decline. From 262 BC Akragas was subjected to Roman rule, which for centuries would make it an important center in the Sicilian area.

Starting from the 7th century AD. the city faced a new phase of decline, a period of progressive impoverishment and the consequent demographic decline reduced the urban center to the area of the acropolis hill only, the population after more than a millennium abandoned the urban area and the area of temples.

In the Valley of the Temples in Agrigento it is possible to admire the remains of many Doric temples, some of which are characterized by an excellent state of conservation, three sanctuaries, a large concentration of necropolis, fortifications, hydraulic works and part of a Roman Hellenistic district. You can also visit two Agora, an Olympeion and a Bouleuterion (council chamber). In 2016, the remains of a Greek theater were also found. It is also possible to admire the Tomb of Terone, the tyrant who gave particular impetus to the city, an imposing pyramid-shaped tuff monument.

On 10 October 2016, an excavation campaign on the hypothesis of the discovery of the Greek theater of ancient Akragas started. On November 4 of the same year, confirmation arrived on the discovery of the Hellenistic theater located just south of the Roman quarter and the Archaeological Museum.

Temple of Hera Lacinia, or temple of Juno, was built in the 5th century BC. and set on fire in 406 by the Carthaginians. It was the temple where weddings were usually celebrated.

Temple of Concordia, whose name derives from a Latin inscription found near the same temple, also built in the fifth century. Currently it is in all probability the best preserved, thanks also to the fact that it was transformed into a Christian temple in the 6th century AD.

Temple of Heracles, or Temple of Hercules, destroyed by an earthquake, today eight columns remain standing.

Temple of Olympian Zeus, built after Himera’s victory over the Carthaginians (480-479) to honor Zeus. It was characterized by the presence of Telamons, immense sculptures seven and a half meters high.

Temple of the Dioscuri or temple of Castor and Pollux. It is likely that it was built in honor of the gods of the earth (Demeter, Persephone, Dionysus).

Temple L, was discovered by recent excavations and is a construction completely destroyed in the classical era.

It is a small Roman funerary monument (1st century BC), which is part of the so-called Giambertoni necropolis, a vast cemetery lying on the slopes of the hill, just outside the ancient walls. The tomb of Theron is made up of two superimposed parts: a cubic podium and a small temple with a square base, with blind doors on each side and Doric corner columns with Ionic capitals and bases.