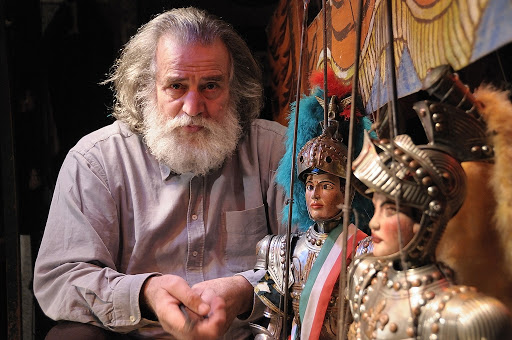 According to tradition, the puppet theater with a chivalrous subject dates back to the Spanish culture of the 1500s, later spread to France and then to Italy in the late 1700s.

In the peninsula, this tradition expanded first to Naples and then to Sicily, where there were already puppets, called the “pupari in paggio” (not armed), which told Sicilian tales.

Towards the first decades of the 1800s they acquired specific characteristics that made them unique, representing the deeds of the greatest medieval heroes who fought for the Church against the Saracens.

The Sicilian puppets were, in fact, clad in very elaborate metal armour and were modified in their movements to improve the visual show in the moment of action, such as in fights and duels, during the theatrical performance.

As above-mentioned, they varied to adjust the movements required during the performance, but these changes were also the hallmarks to recognize if they were from Palermo or from Catania; the former were lighter and articulated, the latter heavier and with fixed limbs.

The “puparo” was the one who took care of the show, the scripts, the puppets, and with a particular tone of voice was able to give a deep interpretation of the epic scenes represented. Although very often illiterate, paradoxically they knew works such as the Chanson de Roland, the “Gerusalemme liberata” and Orlando furioso by heart.

Each pupo typically represented a specific paladin. Christian knights wore full armour, completed with a kilt and cloak, and had almost always the same kind voice and face. The Saracen knights, on the other hand, were immediately recognized by the turban they wore, by the crescents on the armours, by the faces with big mustaches and by the dark voices. In addition, there were also warrior women, recognizable by the armor with embossed breasts, and the “Mangonzesi”, recognizable by the evil face.

All this became an art that spread throughout Europe, but around the 1950s a period of crisis began, due to the success of cinema and television. Many, unfortunately, abandoned the tradition, others, however, continued and tried to save this fantastic traditional art.

The institution of the International Puppet Museum of Palermo, founded in 1975, certainly contributed to the rebirth of the puppets.

In 2008, UNESCO registered the “Opera dei Pupi” among the oral and intangible heritage of humanity, after having originally proclaimed it in 2001. It was the first Italian heritage to be included in this list.

Now, there are few families on the island that hand down this art, and the cities with the most tradition are Alcamo, Caltagirone, Palermo, Monreale, Siracusa and Sulmona.