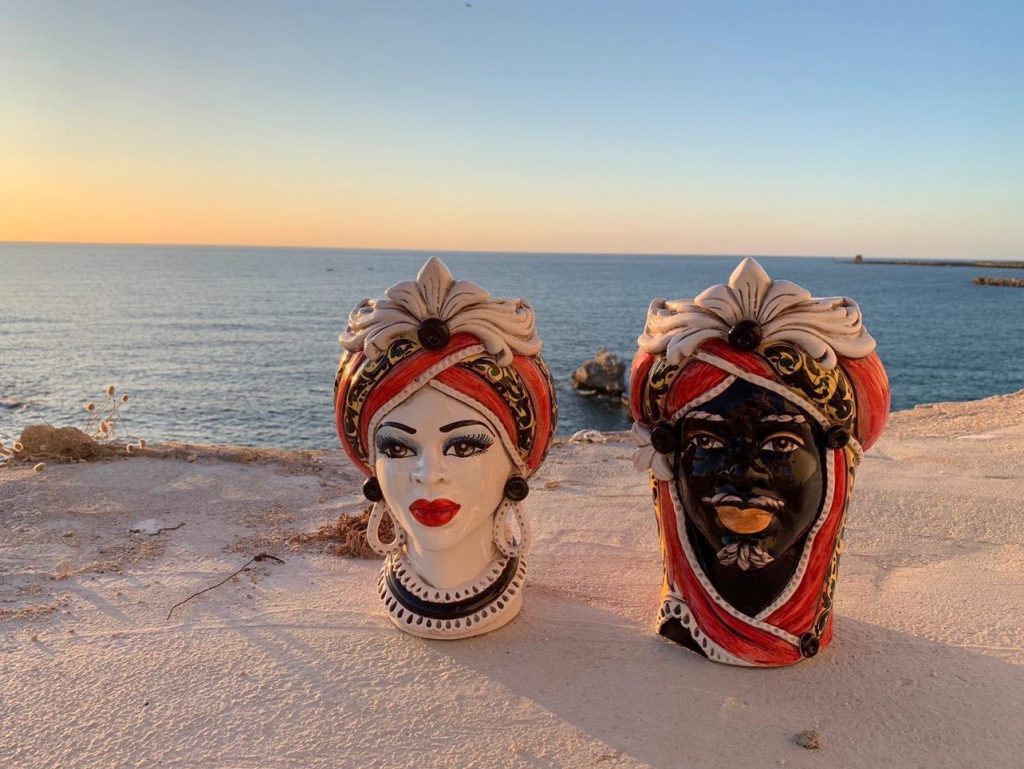 THE MORBID LEGEND BEHIND THE MOORISH HEADS.

In the Sicilian houses, especially in the Caltagirone area, there are very often large decorative vases, representing an Arab prince and a Sicilian woman. Depending on the inspiration of the artist who makes them, the Sicilian Heads can have very different colours. By the way, they still have fixed features whose are their main characteristics. The male figure has a dark complexion, while the woman always has a light complexion. If the male also has white skin, he still has thick mustaches and a turban to make us understand that he is a Moor.

In ancient times the term “Moro” was used in a very general way to indicate African or Middle Eastern people with dark skin. Sometimes, for this reason, the Sicilian heads are also referred to as Moorish heads or Turkish heads.

Both figures are usually decorated with jewels, fruit and flowers. They also have a crown that would regard them as the King and the Queen, but which actually has a completely different meaning. This is revealed by the harrowing legend of the Sicilian Heads: a sad and gloomy story of deception, love and revenge.

Around the year 1000, Sicily was under the Islamic domination, therefore its inhabitants got used to dealing with men and women from Africa and the East. The history of the Sicilian Heads is set in the course of the three centuries during which the Moors and Sicilians lived together. It all began when a Moorish prince fell in love with a beautiful young Sicilian. The girl, like all women of high social classes, lived a large part of her life at home. The girl, however, spent a lot of time on the balcony taking care her beautiful plants. One day, just as the girl was on the balcony, the dark prince saw her and fell madly in love with her. Then, he decided to seduce her, and the girl accepted his court. The two became lovers and the girl began to dream of becoming the bride of the Moorish prince. Unfortunately, however, it was discovered that the man had deceived the Sicilian girl and that his wives and children were waiting for him in his home country. Mad with jealousy, the girl decided to take revenge. One night, while her lover was asleep, she killed him by piercing his chest with a knife. And here the gloomy details: she cut off his head and turn it into a vase to display on the balcony to continue seeing his love every day for the rest of his life. In her pot, the young woman decided to plant some basil, since this plant has always been associated with the elevation to purity. The name of basil derives in fact from the Greek word “basileus”, meaning “King”.

According to another version of the legend, the two lovers were sincere, and their love was pure and reciprocal. The society of the time, however, could not tolerate a marriage between a Moor and a Sicilian woman, so the two lovers were discovered and beheaded. Their severed heads were publicly displayed to remind citizens of what fate they would face if they attempted to violate custom. Sicilians, however, moved by the sad fate of the two lovers, decided to pass on their memory and to manufacture vases in the shape of a woman’s and a Moor’s face, always side by side and never separating them.