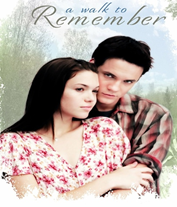 THE INDELIBLE MEMORY OF A LOVE.

“A walk to remember” is a novel written by an American writer, Nicholas Sparks, published in Italy by Frassinelli in 1999.

The story is about Landon Carter, a boy who, in order to please his friends, sometimes gets into serious trouble.  In his last year of high school he decides to invite Jamie Sullivan, the daughter of a pastor whose mother died years before. Jamie is a girl, full of sincere faith towards God, and because of this, she appears incompatible with the rebellious Landon, who is burned by the separation of his parents.  In the end, however, a great love, deep and full of respect, breaks out between them. One day, Jamie reveals to Landon a painful part of her life: she is suffering from leukaemia and her end is near. Landon’s first “repudiated” friends now try to help him through this difficult journey, which ends with their marriage, just three months before she dies.  Four years later, Landon will be a completely different person: a doctor who will always remember the image of Jamie coming towards him. There are some differences between the film and the book:

In the book the figure of friendship that returns is very important, while in the film is just mentioned. Landon Carter, in the film, is a boy who risks jail, while in the book is just a very lively young man who tries to hit friends. In the film, Landon and Jamie meet because Jamie agrees to help him learn the parts of a school play, while in the book, Landon is forced to invite Jamie to the ball. The physical appearance of the two is very different between book and film. Jamie’s passions in the film are music and astronomy, which he knows very well. She excels in singing, while astronomy is understood to the point that at only 12 years old she was able to build a telescope alone. In the film, Jamie had a real passion for astronomy:s he often went to the cemetery to observe the stars. In the book there is no mention of this interest , and going to the cemetery was actually the pastime of Landon. In the film, the play is organised by the school and talks about an episode at the time of prohibition. In the book, it was written by Jamie’s father and is organised by the Church. In the book, there’s no record of the episode of Jamie’s bad joke or the fight between Landon and his friend. In the film, Landon’s parents are divorced and his father is a doctor. In the book, the parents are together, although the father is often away from home because he is a famous politician. Unlike the scene in the film, in the book Jamie marries Landon wearing his mother’s dress and sitting in a wheelchair because of his weakened body. In the film, four years after Jamie’s disappearance, Landon visits the girl’s father and tells him that he has been admitted to medical school. In the book, Landon speaks at the age of 57: he says he still loves Jamie and has never taken off his faith.

The book is certainly full of details that cannot be conveyed in a film or are not easy to grasp. You can read a book, stop, reflect and re-read the passages that somehow struck you for their expressive power. In a film, in addition to words, it is the images, gestures, scenes, landscapes and music that convey content and thoughts. Both contain and communicate relevant messages, even if sometimes revisited; both convey strong and intense emotions at the same time.

If you are a hopeless romantic and believe in eternal love, I strongly suggest you read the novel “A walk to remember”.

Federica Pellegrini is an extraordinary swimmer. She was born in Mirano on August 5, 1988. It was her mother who started her swimming in 1995.

More and more often technology invades not only our daily routine, but also our mindset and our feelings. Usually, the youngsters are more sensitive  about

I cannot believe that! I’m having dinner with the richest duck in the world! Surely you all know the Disney comic and cartoon character, Scrooge

Bullying, unfortunately, is still very widespread today, which is why this has to be remedied. Unfortunately, every day we see more or less serious bullying