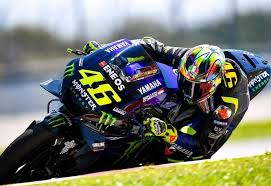 Sunday 14 November 2021, Valentino Rossi finished his motorcycle career with his last race in Valencia. Starting in the top 10, he rode really fast laps and finished in the tenth position ahead of his teammate Andrea Dovizioso, proving once again that age is not important.

We know that records are made to be broken but Rossi’s records are unbeatable. Twenty years of racing to become one of the best bikers in history.

“With Valentino retiring even a part of my heart retires” Max Biagi said. Biaggi is a friend of our champion but he was also one of his great rival on the track. Valentino had many rivals in his career like Kenny Roberts jr, Sete Gibernau, Nicky Hayden, Casey Stoner, Jorge Lorenzo and Marc Marquez in the last years. All these champions know “The Doctor” was the best because in many occasion he proved it in incredible ways. An example? In 2009, in Barcelona, he overtook Jorge Lorenzo at the last bend of the last lap.

Valentino is not famous just for motorcycles. Have you ever heard of VR46 Riders Academy? It’s a group of Italian riders , like Francesco Bagnaia, Andrea Migno, Marco Bezzecchi, Celestino Vietti …who train and spend their time together. This academy was created entirely by Valentino Rossi to help riders arrive at the top level and grow up both as athletes and as men.

The world of motorcycling will never be the same without “the Doctor”. Rossi is a man who has always given emotions everywhere. He was popular among bikers and journalists right for his being outgoing and optimistic. Even people who watched other sports fell in love with him and MotoGP. He is a rider that has always animated and changed the races with his duels up to the last turn.

We love Valentino for his character and for his incredible talent on the track. We think he is the biggest star in motorsport history.