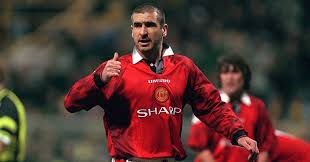 Cantona: Hi everybody, thank you for this interview.

S.: let’s start with the questions: your nickname is the king , or King Eric. How do you feel about this?

Cantona: it’s a beautiful emotion, I like this nickname!

S: you are  remembered mainly for your  past in Manchester Utd, the team in which you played from 1992 to 1997, and for your strong personality as a leader and charismatic driver within the field. Can you list some of the most important steps in your career, please?

Cantona: sure! I  was the protagonist of the sporting rebirth of the Manchester club in the 1990s: with me, in fact, the Red Devils won four Premier Leagues and two FA Cups over five seasons, while in the year in which I did not win a trophy because of the famous Selhurst Park “accident” .

S.: I know you have  always had a controversial relationship with the French national team, but with the Bleus you communicated 45 appearances and 20 withdrawals in 1987 and 1995, also competing in the 1992 European Championship held in Sweden.

Cantona: Yes, this was very  very suspicious of the national team in the episode of Selhurst Park on January 25, 1995, when I collided with a kick on Matthew Simmons, a fan of the Crystal Palace who had insulted me at the end of a game between the Eagles and his Manchester Utd.

S. : Yes, I remember that episode. Never mind, let’s talk about your  next holidays now!

Cantona: My great –grandfather was born in Sassari,  I’m going there on holidays, with my wife,  this summer.

S.: Well, have nice holidays, thank you for your interview!