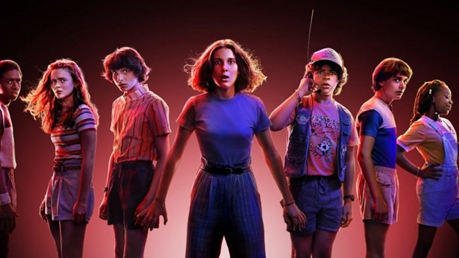 The Netflix series I want to tell you about is Stranger Things, from the thriller and drama genre.

It is set in the eighties, in the town of Hawkins and partly in the world of “Upside Down”, the series centers on the mysterious disappearance of a boy named Will and the appearance of Eleven, a shaved-haired girl with strange supernatural powers, escaped from a secret laboratory.

On November 6, 1983 in Hawkins, a remote and quiet town in Indiana, twelve-year-old Will, a member of a small group of four friends, disappears under mysterious circumstances; at the same time, a researcher is the victim of a disturbing creature. Eleven takes advantage of the confusion generated to escape from the laboratory and runs into Will’s three friends: Mike, Dustin and Lucas, who had set out on the trail of her companion who disappeared into thin air. The girl creates a bond with Will’s friends, in particular with Mike, who agrees to hide her in her house. Eleven is aware of Will’s fate and helps the boys look for him by explaining how he ended up in the “Upside Down” contact with her. The searches of Hopper, Joyce, Jonathan, Nancy and all the boys soon coincide together. A year after the events, Will has frequent visions of the Upside down and a menacing entity that haunts him. In the summer life seems to flow normally in Hawkins in 1985. The opening of a gigantic shopping mall becomes the main attraction of the city, which turns out to be a cover for a large-scale Soviet military operation, which, somehow infiltrated the American territory, are managing to open the door to the Upside Down, thanks to a new machinery; this brings to the awakening a part of the “Shadow Monster” that had remained in our dimension and that, fter having taken possession of many innocent bodies, he will be able to form a creature, the Mind Flayer, with the sole purpose of killing everyone.

This series is my favourite, I find it very intriguing and unlike others, it never gets boring.    The thing that particularly attracted me is the story itself, because it’s a series that goes out of the box, a new series with a plot that I’ve never heard of, so engaging, interesting and compelling. In addition to the story, I was also struck by the choice of the main characters, because it’s nice to make young people live such experiences, and they prove to be very mature during the events told. The curiosities about the series that I learned on the internet also caught my attention; for example, that the actors had to watch films from the 80s to learn and fully immerse themselves in their characters and then that the city of Hawkins does not really exist, in fact the events were filmed in Georgia. It seems that before being made, the series was rejected many times, because of the very young casting and finally to make the series perfect more than 1000 auditions were made among the boys.