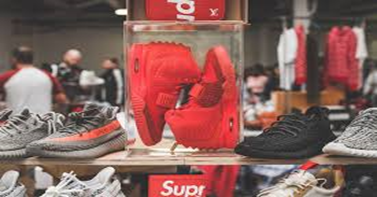 SNEAKERS AND RESELL FASHION: THE TREND AND BUSINESS OF THE MOMENT.

Sneakers: the “meaning” of a shoe

Once considered simple footwear to be used for sports or pleasure, today sneakers, in particular Nike and Adidas, have acquired a different value. In fact, they exert a strong attractive power towards young people – Generation Z in particular (those born between 1995 and 2010) – almost becoming a status symbol. The same thing is happening with certain brands of T-shirts, caps and sweatshirts.

How the sneaker market works?

The sneaker market is based on the so-called “Sneakerheads, sneaker enthusiasts, and on resellers, who try to win limited edition shoes in physical stores or online. The solution would be to increase the production of the most sought-after models, but the manufacturer knows that usually the excess supply causes the desire of enthusiasts to drop (and also the price at which the product will be sold).

The reselling phenomenon: what it is?

Reselling consists in owning a highly sought-after product, usually in a limited edition, and being able to resell it at a higher price to those who cannot obtain it in any other way. The reselling concerns in particular the world of sneakers, basically sneakers, generally by Adidas or Nike, but also other items of clothing of various brands such as Supreme.

How reselling was born?

The phenomenon originated in the United States and subsequently spread to Europe. In our continent the most important markets are Great Britain, France and also Italy, where reselling is registering growing success, accompanied by some criticisms and controversies. In Italy five years ago, collectors represented about 5% of consumers, while the so-called resellers were about 1%. Today all consumers are potential resellers, thanks to social media and dedicated platforms.

Reselling: three reasons why it developed

The digitization of the sneaker market

The search for a luxury brand

What does the reseller do?

The reseller must use all the tools at his disposal to locate and purchase the sneakers in the limited edition release phase. One of the applications he can use is Nike’s SNEAKRS (App Store, Play Store). The app is free and the sneakers are released through “Draws” at a specific time, or rather a random draw. After entering the app and confirming entry to the draw of the selected shoe, you will receive a notification if you have won the pair. It is one of the methods to “make your way” in an industry increasingly flooded with bots that are used to make lightning-fast purchases on various websites.The reseller who managed to win the sought-after footwear must now resell. To do this, there are marketplaces where you can sell (or buy) such as StockX, Grailed and Flight Club. You can also attend ad hoc groups where you can resell new or used sneakers of all kinds, as long as you respect the publication rules and the netiquette of the group.

The platform born from reselling: StockX

Co-founded in February 2016 in Detroit by Josh Luber, Greg Schwartz (COO) and Dan Gilbert, offers sneakers, but also streetwear garments and limited edition accessories. StockX connects buyers and sellers with the same methods as the stock market, using anonymity and standardization to provide real-time market prices and complete transparency. All products are physically checked and authenticated by StockX authenticators. The platform also provides in-depth market analysis, individual portfolio tracking, sales histories and market volume metrics. StockX has millions of active users in nearly 200 countries. The company transacts millions of dollars every day and handles thousands of products through its four authentication centers in the United States and Europe, which will soon host a fifth European branch just a few kilometers from Amsterdam. The team, which started with just four co-founders, now includes over 800 full-time and part-time employees.

For us, it’s easy enough to go and buy a pair of shoes; the only problem is finding something we like and that fits well: we can’t imagine how much work there is behind it and how many thinking minds are involved in creating and then launching it on the market and competing companies, a real world at work to satisfy us and make us feel good.