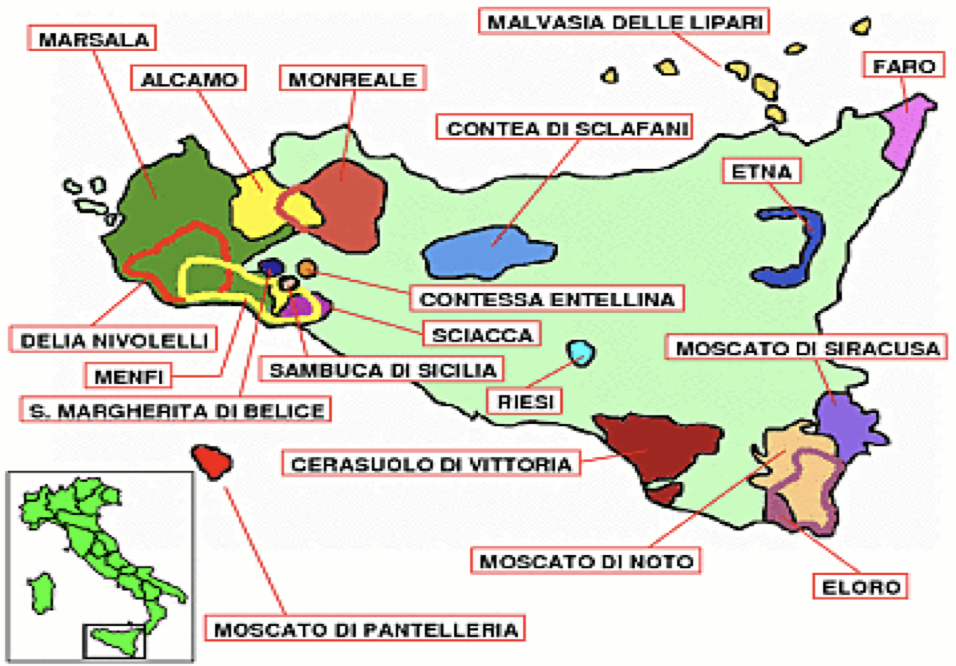 SICILY AMONG THE MOST IMPORTANT VINEYARDS IN THE WORLD

Wine and vines have always accompanied the history of Sicily. It is believed that the vine grew spontaneously in Sicily long before the arrival of the Greeks and many grapes – now considered indigenous – were introduced by the Phoenicians. Viticulture was most likely introduced on the island during the eighth century BC. by the first Greek colonists, thus laying the foundations for the future enological wealth of Sicily.

The Greeks introduced their techniques, such as pruning, sapling cultivation and varietal selection, thus upsetting the local habit of letting the vine grow spontaneously which, thanks to the particular environmental and natural conditions, was still capable of producing copious harvests. Although the Greeks contributed to the enological development of the island, archaeological finds testify that the consumption of wine was already widespread since the seventeenth century BC; however it was the Greeks who contributed significantly to the development of Sicilian viticulture and enology.

At the time of the Roman Empire the wines of Sicily were among the most famous of the ancient world, they were widely exported and highly appreciated in every place.

Both native vines and international grape varieties are grown, used in blends with local grapes. Grapes and wine are widespread throughout the region and many of the island’s native vines have been re-evaluated, after having concretely risked extinction, ranking today among the important grapes of Italy. Among these, the most famous autochthonous black grape variety is Nero d’Avola, whose wines are characterized by intense aromas and impressive structures. Among the white grape varieties, the best known is the Zibibbo with which the sweet wines of Pantelleria are produced, today considered among the best in Italy. Among the most important native white berried grapes in Sicily are Carricante, Catarratto, Grecanico, Grillo, Inzolia (also known as Insolia or Ansonica), Malvasia di Lipari and Moscato Bianco. Among the autochthonous black berried grapes we have Frappato, Nerello Cappuccio and Mascalese, Perricone or Pignatello.

The Designations of Origin for wine in Sicily include numerous DOCs.

In particular in the province of Messina we remember the Faro DOC, one of the first in Sicily, based on the vines of Nerello Mascalese, Nerello Cappuccio and Nocera; then followed by the Aeolian Islands with the Malvasia delle Lipari DOC and the white wines of the island of salina.