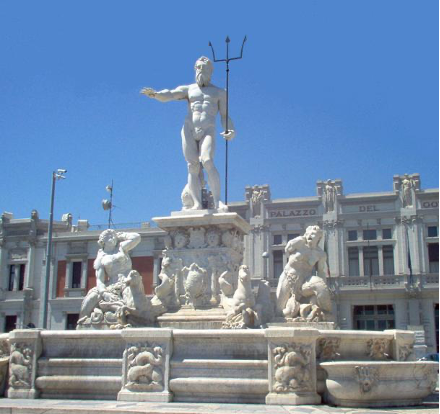 SCYLLA AND CHARYBDIS: TERRIBLE MONSTERS OR VICTIMS OF A TRAGIC AND UNHAPPY DESTINY?

Sicily: a land of myths, magic, traditions. It has always been a privileged scenery on the Mediterranean Sea for encounters between peoples, a melting-pot of peoples, a forge of ideas and theories, giving birth to industrious minds in continuous evolution such as Archimede and Empedocle. This island has always been a seaport. Confused between the mists of myths and the real events, we explore the history of the Siculi who arrived from the north. It is the land of legends of monsters, too, such as Scilla and Cariddi, terrifying whirlpools and imaginary creatures who protected and scared peoples over the centuries.

The Legend of Scylla and Charybdis 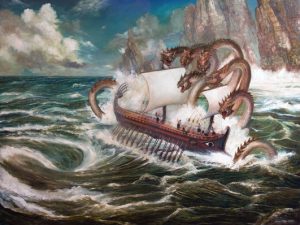 Before her name became a synonym for monstrosity and danger for navigators who ventured into the strait of Messina, Scylla was a beautiful nymph, daughter of Forcides and Crateide. It is highly probable that Scylla was the name she was given after because, according to the Greek etymology, Scylla means “the one who tears to pieces”. It had nothing to do, at least at the beginning, with the terrifying Charybdis, whose story is totally different.

Indeed, that of Scylla is a story that speaks of love, of great passions but also of magic and spells and goes back to Glauco, a mythical figure around which sweet feelings are intertwined not only with Scylla but also by Circe, the sorceress. According to tradition, Glauco is a fisherman in the city of Antedone, in Beotia. He has a divine descendance, as he is the son of Poseidon and Naide. Despite of his ancestors, he is a mortal creature. However, one day, after eating a magic herb collected in a field, Glauco earns a mermaid’s tail instead of his legs, becoming a sea deity. Glauco also changes his appearance to better adapt to this new divine form: the shoulders become larger and wider, his legs disappear, replaced by a long fin. The cheeks are covered with a green fluff, so it ends up looking like a bronze statue. He becomes a prophet and protagonist of many adventures. He is strong and powerful now and he cannot avoid clashing with the Argonauts, led by Theseus, on the route to return home after having conquered the Golden Fleece. He likes to show off: he appears to Menelao when he returns to Troy.

However, his is heart is still that of a mortal still beats for a raven-haired maiden with eyes as bright as stars. It is Scylla! But the terrible and jealous Circe gets in the way: the sorceress, devoted to Glauco because he gave her the gift of clairvoyance, would like him all for her. The spells have no effect on Glauco’s divine nature and she is desperate and risks falling into a deep depression. Circe, however, manages to discover the source where Scylla draws water. What does that woman who will turn Ulysses’ traveling companions into pigs one day?

The sorceress begins to choose the most powerful herbs, the ones that can produce quick and devastating consequences. She is determined to destroy that girl, whose only mistake was that of being loved by Glauco. The effect is immediate. As soon as Scylla touches that water, the unpredictable happened. She harmlessly witnesses the rapid transformation of her lower body. The legs disappear and, in their place, terrible barking dogs with sharpened teeth appear. These beasts are ready to lacerate whatever is within their reach. Scylla, whose upper part has remained intact, is horrified to witness her transformation. The dogs drag her away, they stop only when they arrive on the Italian coast overlooking Sicily where she is destined to remain, hiding in a cave, forced to devour the sailors who venture into the Strait of Messina. So, Scilla happens to find Charybdis, a companion for her continuous massacres of sailors. The two share a terrible destiny and story. Charybdis was the daughter of Poseidon and Gaia. She was a beautiful and graceful girl, tormented by her voracity. So, one day, after having stolen numerous oxen from Geryon, she ended up devouring them all. The master begged Zeus to give her the right punishment. A lightning bolt, launched by the lord of the gods, struck the girl by making her fall into the sea from a very high cliff. Once in the abyss, Charybdis was turned into a monster. She took up as residence a cave, opposite to that of Scylla. While the latter was crushing in the jaws the unwary sailors we, Charybdis swallowed them up and rejected them with a mighty roar. Whoever crossed the Strait was awaited by a tragic end.

This myth is surely the anthropomorphical interpretation of the two currents that meet in the Strait produced by the Ionian Sea and the Tyrrhenian Sea, one warmer and the other colder respectively. This encounter causes the phenomenon of the so-called “Gorghi dello stretto” which were nothing more than eddies in the water that recall the three mouths of Charybdis. A wonderful legend and a real danger that have been handed down by navigators and sailors who were terrified in the past!