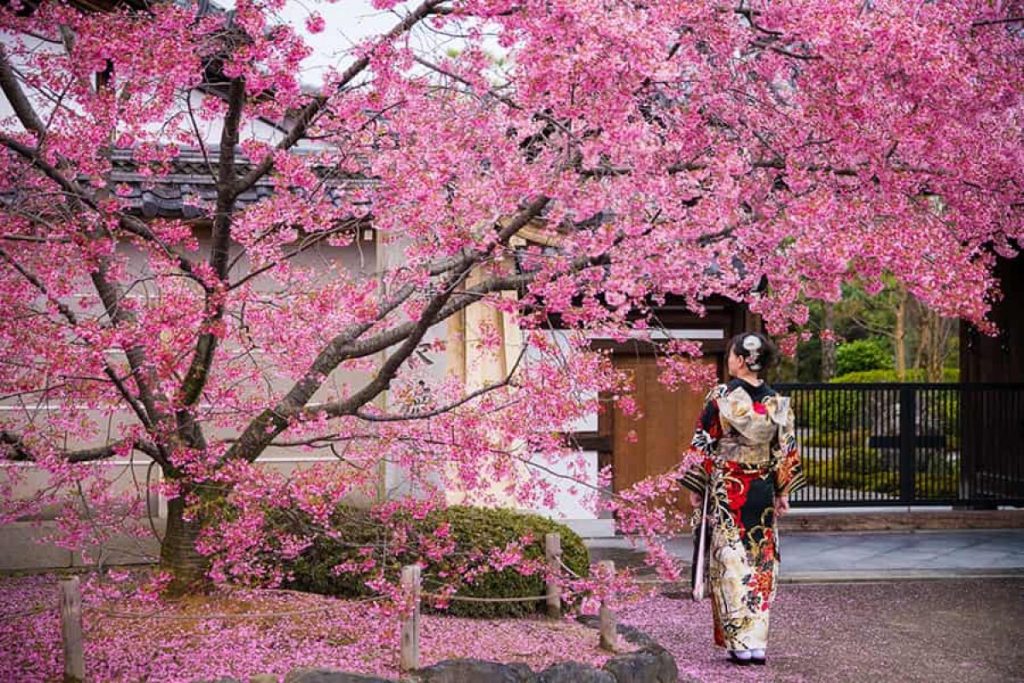 The Japanese legend of Sakura dates back hundreds of years ago. At that time the feudal lords challenged each other in battles, in which many humble fighters died, thus spreading sadness and desolation throughout the country. Due to the frequent wars, moments of peace were very rare.

Despite this, there was a splendid forest that the war had not yet touched, full of lush scented trees which comforted the tormented people of ancient Japan. None of the armies dared to damage that wonder of nature.

In that beautiful forest stood a tree which never bloomed. Even if it was alive, flowers never appeared on its branches. It looked like a dead, thin and dry tree.

It always stood alone. The animals did not go near it, because they were afraid of getting infected by the same tree’s disease and not even grass grew nearby.

The legend of Sakura tells that a forest fairy was moved by seeing the tree old appearance, despite its young age. One night the fairy appeared next to the tree and whispered that she was willing to help it appear luxuriant and full of life. So she made her proposal: she would have cast a spell which would have lasted 20 years. During that time, the tree would have felt what the human heart feels. Maybe the spell would have made him excited and able to blossom. The fairy added that the tree could turn himself into a human being and back into a plant at any moment, if it wished. However, if it had been unable to regain its vitality and beauty after that period, it would have died immediately.

Being able to take the form of a man whenever it wanted,  the tree tried to spend long periods among humans, to see if their emotions could help him in its purpose to blossom. At first, however, it was very disappointed: it saw nothing but hatred and war all around.

This pushed it to come back to its original form for long periods, and so the months and then the years passed. The tree was the same as it always was and could not find the turning point that could free it from its condition.

One day, however, after turning into a human being, it walked to a stream and there he saw a beautiful young woman. She was Sakura. Impressed by her beauty, the human-like tree approached her.

Sakura was kind to it. To return her kindness, the tree helped her to carry the water home. During the journey they talked pleasantly: they shared their sadness about the war, their dreams and hopes.

When the young woman asked it what was its name, the tree answered: “Yohiro”, which means hope. Sakura and Yohiro became good friends. They met every day to talk, sing and read stories. The more the tree spent its time with Sakura, the more it felt the need to be by her side. When it wasn’t with her, Yohiro counted the minutes until it could meet her again.

One day Yohiro decided to confess its love to Sakura. It also told her about its real nature: Yohiro was a tormented tree that was not able to blossom anymore and for that reason he would soon have died. Sakura was upset and did not know what to say.

Time passed and the 20-year deadline was around the corner. Yohiro, who took again the shape of a tree, felt more and more sad.

One day, Sakura showed up in front of Yohiro, taking it by surprise. She hugged it and told Yohiro she loved it too and did not want anything bad happen to the tree. It was then that the fairy appeared again and asked Sakura to make a choice: did she want Yohiro remain human or did she want to merge with it by becoming a tree?

She looked around and remembered the desolate, war-torn fields. Then she decided to merge forever with Yohiro and so the two lovers became one, and as if by a miracle, the tree finally blossomed.

The word ‘Sakura’ means “Cherry Blossom”, but the tree didn’t know it. Since then, their love has been spreading a nice smell and colour throughout the Japanese fields.