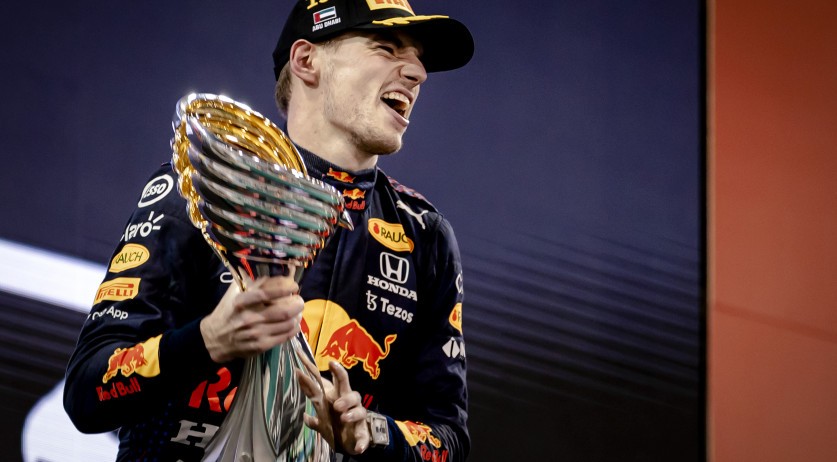 After an incredible year, Max Verstappen wins the world title thanks to a spectacular race.

After dedicating his life to racing he has achieved his great objective.

Max was born on 30 September 1997 in Hasselt. His career began at the age of 8 on karts in the Belgian and Dutch championship, helped by his father Jos Verstappen, a former F1 driver and also a former teammate of Michael Schumacher in Benetton. From 2010 to 2013, his karting results were in KF3 Euro Series, KF3 Nations Cup, KF3 World Series, Euro Series KF2, Euro Series KZ1, Master Series KZ2 and the victory of KF2, KZ and world championship KZ. In 2014 he landed in single-seaters, making his debut in Florida Winter Series, where he concluded with 2 victories and the final third place behind Antonio Fuoco and Lance Stroll. The same year he took part in the FIA Formula3 European Championship. In 2014, he also became a member of the Red Bull Junior Team. And on October 3, 2014, at the age of 17 and 3 days, he made his debut in F1 free practice in Suzuka, but also in Austin and Interlagos. In 2015, Max became the titular driver of the Toro Rosso team, alongside Carlos Sainz Jr. In the first two races Verstappen already set two records. In Australia, he became the youngest driver in a Formula 1 Grand Prix, and in Malaysia he became the youngest driver to score points in Formula 1. Then, in Hungary, Verstappen worked magic by finishing fourth. He conquered another fourth place in America and at the end of the year was 12th with 49 points.

In 2016, Verstappen after some good results with Toro Rosso, on 5 May, was promoted the Red Bull instead of Danil Kvjat. At his debut, with the Red Bull, in Spain, Max was fourth in qualifying. In the race, helped by the contact of the two Mercedes of Hamilton and Rosberg, Verstappen managed to win the grand prix on his debut with Red Bull. With his first victory in Spain he became the youngest driver to win a F1 grand prix then he returned to the podium in Austria, Great Britain, Germany, Malaysia and Brazil. At the end of the year he was fifth in the drivers’ standings, with 204 points.

In 2017 Verstappen started the world championship by finishing fifth and in China, even if he started from 16th, he arrived 3rd. Then, he won in Malaysia and Mexico. At the end of the year after many retirements was 6th in the standings with 168 points. In 2018 the first podium was in Spain, and, in Montecarlo, he made an excellent comeback from last to 9th place. In Canada and France he took two good podiums but the first victory of the season arrived in Austria, at the Red Bull Ring. Then he returned to the podium in Belgium. The other podiums arrived in Singapore, Japan and America. He won in Mexico again and in Brazil he was the second after a contact with the dubbed Ocon. I remember that race. I was at my friend’s home to watch the gp together. The last podium of the season arrived at the last gp in Abu Dhabi. Max was 4th.

In 2019 his car was good but Mercedes was the best car. He was first in Austria and in Germany, where Max started 3rd and after a fantastic race, that is one of my favorite race, he won. On the podium there were Vettel (second place) that started 20th and Kvjat (third place).

In Hungary he took the first pole position in F1. He won in Brazil and at the end of the year he was 3rd with 278 points. In 2020 the best car was Mercedes. Ferrari wasn’t so good and Red Bull fought for the second place in constructors championship. But he took the first victory in Silverstone. In the 70 anniversary GP of F1, he won and he won again in the last race of the season, in Abu Dhabi.

And now, the 2021 F1 championship. The car to beat was Mercedes. Hamilton won in Bahrain, Verstappen won in Imola. Then, Hamilton won in Portimao and in Spain and Verstappen in Monaco. In Baku, Perez won but no one took points. In France, in Austria and in Styria Verstappen won. In England after Verstappen’s accident with Hamilton, the winner was Hamilton. In Hungary Ocon won ahead of Hamiton and Verstappen was eighth. Verstappen won in Belgium and Holland. In Monza the winner was Ricciardo. But there was an accident and Verstappen’s car flew over Hamilton’s one. In Russia, Hamilton obtained his 100th victory. In Turkey, the winner was Bottas, ahead of Verstappen, Perez, Leclerc and Hamilton who started 11th to change some engine parts. Verstappen won in America and in Mexico but Hamilton won in Brazil after a spectacular comeback. At this point there were only 3 races in the Arab Emirates. The first in Qatar and the last race, in Abu Dhabi. In the last race, Verstappen started 1st but Hamilton overtakook him at the start. Verstappen tried again in the first lap but Hamilton cut the corner and no-penalty was given. They both stopped in the pits. After an amazing defence by Perex with Hamilton, Verstappen was at 1 second from Hamilton but Hamilton was faster. The only hope for Max was a Safety Car. And in fact, on lap 53, there was a crash and the Safety Car. Verstappen changed the tires, Hamiton with old tires for more than 40 laps remained out and FIA director Michael Masi decided to give away the last lap of the championship. Verstappen overtook Hamilton before the two straights. Hamilton tried in the first and in the second they were wheel to wheel. But Verstappen was faster and then he won the grand prix and the world championship. Mercedes sent two complaints but they were rejected. At the end of the race the two great rivals shook hands and congratulated each other. And as many commentators said, it was a world championship that will never be forgotten.