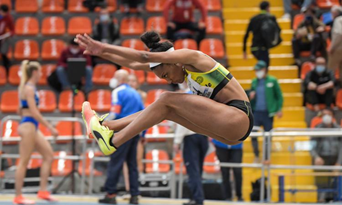 Larissa Iapichino makes history and enters the world long jump. At the Tricolori indoor in Ancona, the 18-year-old “daughter of art” has achieved a feat that will remain sculpted in the annals of athletics not only Italian. In fact, he won the national title amazing, because with the measure of 6.91 he matched the absolute Italian indoor record of his mother Fiona May who had obtained it in Valencia in 1998, when he won (at 28 years) the European indoor. ” I’m stunned, it’s all surreal: and now Tokyo,” says Larissa.

And a crazy story, the one about the little girl who advertised a chocolate with Mom Fiona in a famous commercial about fifteen years ago and who has now grown up and promises to emulate, if not better, the parent who inspired, together with Dad Gianni Iapichino, in choosing the athletics among the many sports he practiced since his elementary school days. The sport is rich in children of art, but champions who at only 18 reach and surpass those who gave him their genes, in a symbolic race through time, are really rare.

The chromosomes are the right ones, and this is also demonstrated by the fact that the measurement obtained today by the Florentine girl of Borgo San Lorenzo is also the new record of the indoor world under 20, that improves by three centimeters what it resisted since 1983 and belonged to the phenomenal German Heike Drechsler, great rival just mother Fiona. And again: no ‘long man’ in the world in 2021 has done better than the bearer of the Yellow Flames, which with today’s performance has crowned the dream of going to the Tokyo Olympics. Where, but it’s better to say it quietly, Larissa could play a leading role despite the very young age: will turn 19 in July, the same month in which the Games will begin.

“I have not yet realized what I have done – comments the Iapichino -, I will do it calmly. When I saw 6,91 I said that I had jumped like my mom, then I realized the rest. And now everything seems surreal, a dream”. And so is Tokyo, bringing home a standard measure for the Games at 18 is not an everyday thing. I hope I can learn from the many champions that I will face…….Breaking a Drechsler record was a shocking thing to me, she was one of the long jump goddesses….. I’m very excited”..

A world emotion that amazes the Palaindo di Ancona. Iapichino is unleashed and realises that she is one step away from something epoch-making. And the wonder arrives: the run-up is fast, the axis of the bar gives practically nothing and the landing in the sand leaves a mark that is not far from seven metres, the measure of the world elite. She explodes with joy when the display shows those magic three figures, so longed for: 6.91. She ran to embrace her coach Gianni Cecconi and her father Gianni Iapichino, who were ecstatic, just like her mother Fiona May who rejoiced in the stands, happy to be going crazy. A star has been born, one that promises to shine for a long time.

This achievement by a girl of just 18 years old can be an encouragement to all young athletes who, like her, aspire to set a world record and represent their nation at the Olympics. This is proof that even with just a few years of experience it is possible to achieve great goals, which for many were unimaginable. Larissa is a great example for her peers, a great demonstration that anything is possible when the right ingredients come together: passion, commitment, determination.