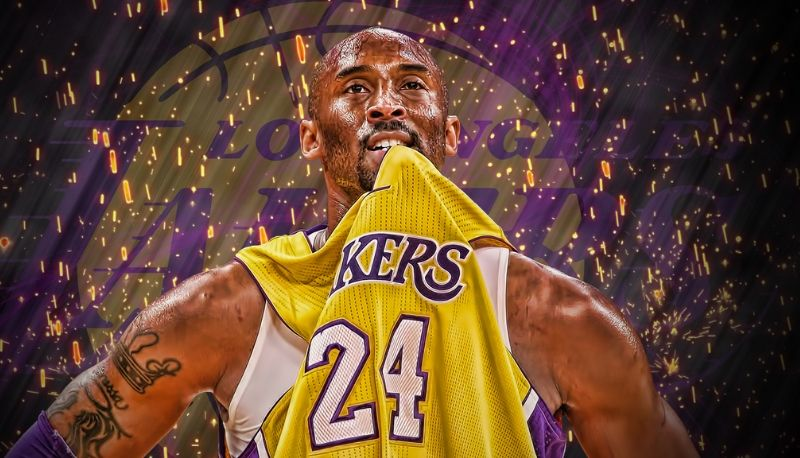 Kobe Bean Bryant (August 23, 1978 – January 26, 2020) was an American professional basketball player, considered one of the greatest players of all time.

Immediately after high school he joined the Los Angeles Lakers team in the NBA (National Basketball Association) and played 20 league seasons with the same team.

He is the son of former NBA player Joe “Jellybean” Bryant. Kobe’s middle name Bean comes exactly from his father’s nickname “JellyBean”. His father retired from the NBA when Kobe was six and his family moved to Rieti, in Italy, to continue playing professional basketball. Even though he learned to play soccer, Kobe’s first love was still basketball. At 13, he started his basketball career when they returned to Philadelphia. Bryant won five NBA championships, he was an 18-time All-Star, he was named the 2008 NBA Most Valuable Player (MVP) and he was a two-time NBA Finals MVP winner.

In the 1996 NBA draft he was selected by the Charlotte Hornets and then traded him to the Lakers. The Bryant-O’Neal duo led the Lakers to three consecutive NBA championships from 2000 to 2002. After O’Neal was traded, Bryant became the cornerstone of the Lakers; he led the NBA in scoring from 2005 to 2007. In 2006, he set a record of 81 points, the second highest score in NBA history. Bryant led the team to two consecutive championships in 2009 and 2010 and was named MVP of the NBA Finals on both occasions.

On April 13, 2016, Bryant performed for his last career game in front of a sold out crowd at the Staples Center scoring 60 points and leading the Lakers to victory over the Utah Jazz. He became the oldest player to score 60 or more points in a game at 37 years and 234 days old. He continued to be among the best players in the league until 2013, when he suffered an Achilles tendon tear at the age of 34. He officially retired after the 2015-16 season. At 34, Bryant became the youngest player in the history of championship to reach 30,000 career points.

In 2017 he shoots his own film dedicated to basketball and in 2018 he won the Academy Award for Best Animated Short Film for his film “Dear Basketball” written and narrated by Kobe Bryant. The film is based on the letter Kobe wrote to announce his retirement from basketball, where he talks about his love for his sport and the harmony between him and basketball.

He died on January 26, 2020, in a helicopter crash in California with other eight people, including his 13-year-old daughter Gianna Bryant.

Kobe Bryant was one of the greatest basketball players of all time, but his influence extended far beyond; he taught people how to be more than just an athlete. He supported a large number of charities.

The Kobe and Vanessa Bryant Family Foundation was one of the basketball star’s most impactful works. Bryant and his wife started the foundation to improve the lives of young people and their families. Following the deaths of Bryant and her daughter, Vanessa changed the name of their non-profit family. The organization is now called the Mamba and Mambacita Sports Foundation, honoring Kobe and Gianna. Kobe Bryant gave himself the nickname ‘Black Mamba’ when he was alive.