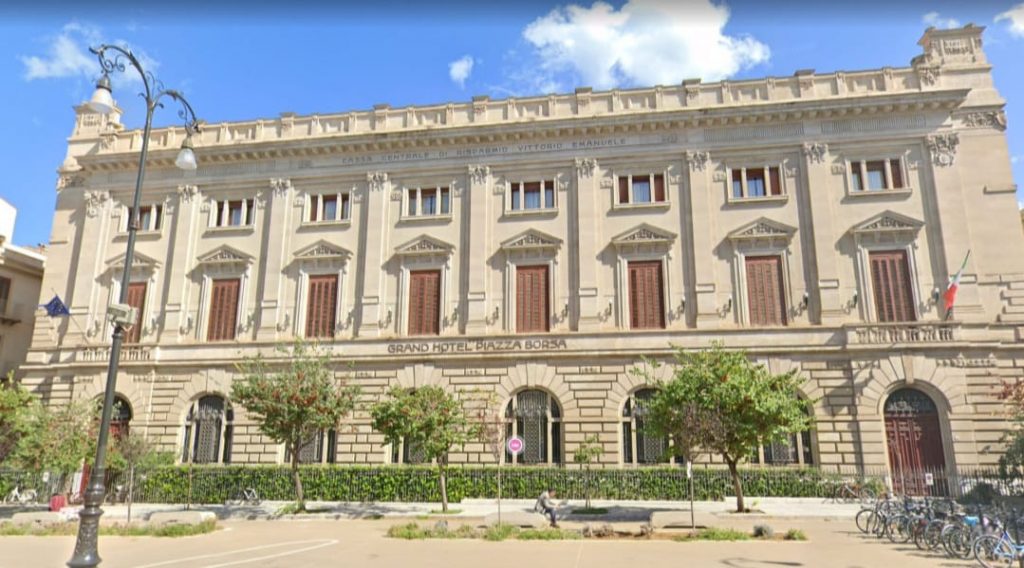 The spearhead of Sicilian Hôtellerie

If you come to Sicily and you want to visit Palermo you should book a room at the Grand Hotel Piazza Borsa, at “via dei Cartari”, in the Kalsa district, the heart of the historic center. It is an excellent and welcoming hotel.

It is truly a place of memory, the spearhead of Sicilian hotels, 4-star superior. It occupies an area of 12 thousands square meters.

It has A 500-year history: it was a place of prayer, then the Stock Exchange in the “Kingdom of the Two Sicilies” (place where securities were negotiated), then the seat of the “Banco di Sicilia” and finally a prestigious hotel after the transfer of ownership to the “Costa degli Ulivi ” company of the brothers Salvatore and Giovanni Di Giovanni.

They combined a convent, a palace and a bank to get a luxury hotel and, after a five-year period of restoration work, in February 2010 the hotel was inaugurated… and I was there! thanks to Uncle Mario (Monforte), the best hotel manager.

The Di Giovanni brothers have always been committed to the development of the Sicilian economy by designing 2 other hotels in Palermo: the Splendid La Torre hotel in Mondello and the Torre Normanna hotel in Altavilla Milicia, which are located by the sea with attached bathing establishments.

Now the structure of the Grand Hotel Piazza Borsa consists of three buildings: the ex convent of the monks of the Mercede, the ex Savings Bank of the Banco di Sicilia and the ex Palazzo Cattolica – Briuccia.

The central nucleus consists of the convent and the church of the “Padri della Mercede”, a monastic order of great prestige in Palermo from the end of the 16th century onwards.

In the first half of the eighteenth century, the monks received as a dowry the nearby palace of the Cattolica Briuccia princes, which was connected to the convent rooms with three stone bridges, about 20 meters long, (the three “passetti”), supported by elegant grey marble columns.

In 1860 the decline of the order of the Scalzi Mercedari in Palermo began and in 1861 the structure received important financial offices.

In 1907 the church of the Immaculate Conception annexed to the convent was demolished and in its place the architect Ernesto Basile, incorporating part of the square in front, built the building that became the headquarters of the bank “Cassa Centrale di Risparmio delle provincie siciliane Vittorio Emanuele”.

The cloister and the monumental staircase in red marble extracted from the nearby “Piana degli Albanesi” remain unchanged today.

The main entrance of the hotel is in “Via dei Cartari”.

A large revolving automatic door introduces you to the heart of the structure, a magical place, where there is the ancient cloister of the ‘500 in Baroque style that belonged to the convent of the Mercedari Fathers, surrounded by a porch and with a large fountain in the center that houses small lounges for hotel guests, where there are also private events such as weddings, parties, conferences and dinners.

A self-propelled roof covers the cloister.

It is overlooked by the reception and the “Kemonia” restaurant (named after the river that flows under the city) with its frescoed ceiling and some hotel bars.

Walking through the hotel we find the magnificent “Ducrot” room (named after the French entrepreneur and designer Vittorio Ducrot), declared a monumental asset, built on a project by the architect Ernesto Basile, where the original furnishings in Art Nouveau – built in a famous furniture factory of Palermo – coexist with the beautiful frescoes of the early twentieth century, dedicated to the cycle of craftsmanship.

Also worth a visit is the “Giardino d’Inverno” room, entirely frescoed by Palermo artists, with landscapes taken from the most beautiful coasts of Sicily, overlooking the large rose window of the church of San Francesco.

Next to it there is the “smoking room” where a large composite glass chandelier hides a powerful extractor fan that allows guests to smoke inside without disturbing anyone.

Climbing the monumental staircase you reach the floors where there are spacious rooms, well furnished and with all comforts, some with a living room and a balcony and all overlooking the city of Palermo: Executive Rooms, Deluxe Rooms, Executive Suites, Deluxe Suites, Suites Queen Costanza.

An entire floor is dedicated to the wellness center, spa and gym: hotel guests can book a wellness program or a relaxing massage enjoying soft music, take a sauna and emotional shower or immerse themselves in the jacuzzi.

But above all the kindness and availability of the director and staff who are always ready to meet the guests’ requests.

You couldn’t ask for anything better.

Exploring the Grand Hotel Piazza Borsa is a unique experience, a journey through time.

Here art, history and culture meet with a luxury hotel, where perfectly restored rooms follow one another in harmonious sequences, making Piazza Borsa one of the most prestigious hotels in Palermo.

I was lucky enough to know the hotel directly from the stories of my uncle Mario (who was the manager): I still remember that while I was walking inside, he described it lovingly , as if it were a precious asset to take care of.

The hotel is always open, but to visit the entire hotel you should wait for the “Le Vie dei Tesori” festival which takes place every year in October and November.

On that occasion, Piazza Borsa opens exceptionally to the public and guided tours are planned to celebrate the hotel as a real monument and make it known to tourists as one of the most evocative places in the city, which has preserved its historical and artistic value over time.

Its privileged location in the center of Palermo allows hotel guests to reach on foot all the most important monuments and the most characteristic places of the city: the two ancient markets (the Capo and the Vucciria), the Massimo Theater and the Politeama Theater, “via Roma” with its typical restaurants and shopping streets (via Ruggero Settimo, via Libertà and via Principe di Belmonte).

You can also walk to the Marina, the Cathedral, the Quattro Canti square, Piazza Pretoria with its numerous churches, the “Chiesa del Gesù”, the Salinas Museum and the Palazzo Abatellis (which houses the painting “The Annunciation” by Antonello da Messina).

I love the Grand Hotel Piazza Borsa and I love Palermo!

For you Uncle Mario …