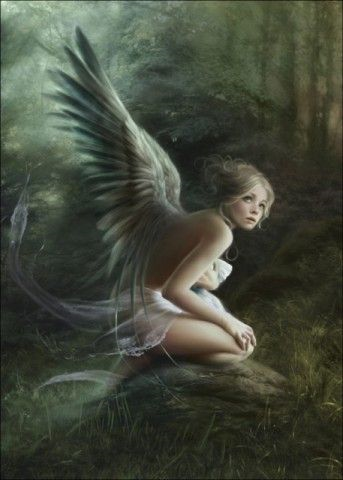 Something magical anyway.  “Each blade of grass has its own angel, bending over him, who tells him ‘Grow, grow!”

From the Talmud (ancient Hebrew text).

The creatures referred to in the Talmud are the “angels of nature”; they watch over the environment and animals.

Since nature is made up of basic elements such as earth, water, air and fire, the angels of nature belong to the “kingdom of elementary creatures”.

It is thought that fairies are angelic creatures that reside very close to the Earth, in order to carry out the Divine mission of protecting nature and animals.

Some of them have wings similar to those of dragonflies, others have wings that look like those of butterflies, in contrast to the feathered wings of guardian angels and archangels.

Unlike the latter, fairies have egos, and from this point of view they are very similar to humans, in that they possess judgment skills.  These creatures judge you by the way you treat the environment and animals.

Fairies don’t expect everyone to be perfect, but if you do your best, if you are kind to animals and other such things, they will have respect for you and treat you favorably.

If, on the other hand, they find you oblivious to nature and the beings that inhabit it, they could play some tricks on you: this is why they have earned a reputation for being malicious.

Fairies are often called “fairies”.  Regardless of what you call them, know that they are driven by the pure desire to intervene to make your existence healthier, happier and more prosperous.

According to some books because they are so close to the Earth, they can also assist you with concrete problems involving money, home, health, garden or pets.

Have you ever seen fairies as a child?  It sometimes happens to many children.

According to a study, they are creatures prone to show themselves to the little ones, rather than to adults, because children have the most open mind and purest heart.