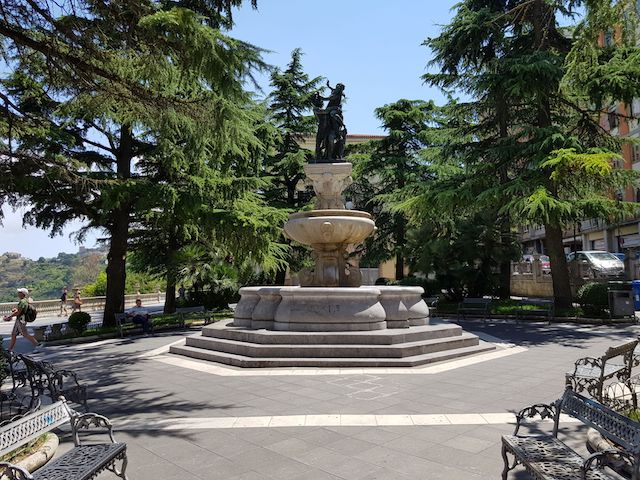 ENNA AND PROSERPINA, AMONG MYTH, NATURE AND CULTURE.

The goddess of the underworld, springtime, flowers and vegetation, Persephone for the ancient Greeks, Proserpina for the ancient Romans, belongs to the culture and collective imagination of my city, Enna, in the heart of Sicily. Like my fellow citizens, I also grew up through the story of the kidnapping of this girl. A matter among Divinities, you will think, maybe … I add.

Everything here speaks of her, starting from the fountain that remembers her abduction.
It is said that Proserpina, Ceres’ daughter, the Goddess of fields and fertility, and Jupiter’s, king of all the Olympians, was noticed on the shores of Lake Pergusa by Pluto who fell madly in love with her and took her with him to the kingdom of the underworld where she was forced to marry him.

What was Ceres’ reaction to this news? Petrified by the loss of her daughter, the Goddess, took revenge by preventing the earth from sprouting, thus seriously endangering the very existence of the human race. The priests then made sacrifices in her honor in a place that still bears her name today: the Rock of Ceres.

Pluto meanwhile had tricked his bride Persephone into eating pomegranate grains to bind her forever to the underworld. Pitying the pain of Ceres, Jupiter sent his messenger Mercury to Hades to bring Proserpina back to earth and from that moment on she would have spent six months of the year with her mother, the period when nature returns to bloom, and six months in the underworld, corresponding to winter time when nature rests. The ancients explained in this way the changing of the seasons and the cycle of fertility and infertility.

Through this fantastic story I retraced the places that make my city a wonderful and fascinating place: Lake Pergusa, now a nature reserve, the Proserpina Fountainthat dominates the Belvedere squarefrom which you can enjoy a spectacular view, the Rocca di Cerere… and much more.

I hope I have aroused your curiosity and I highly recommend you a visit to Enna which is also the highest provincial capital in Italy with its 1100 m. of altitude,  called “urbs inexpugnabilis” and “umbelicus Siciliae” by the Romans.

One last suggestion, the Myth Museum, inaugurated a few months ago in Enna, is built with eco-sustainable criteria and materials. In the immersive video art project, the traditions, legends, myths and history of the past are told with current and multimedia techniques and languages. For a virtual tour click on  https://www.museodelmito.it