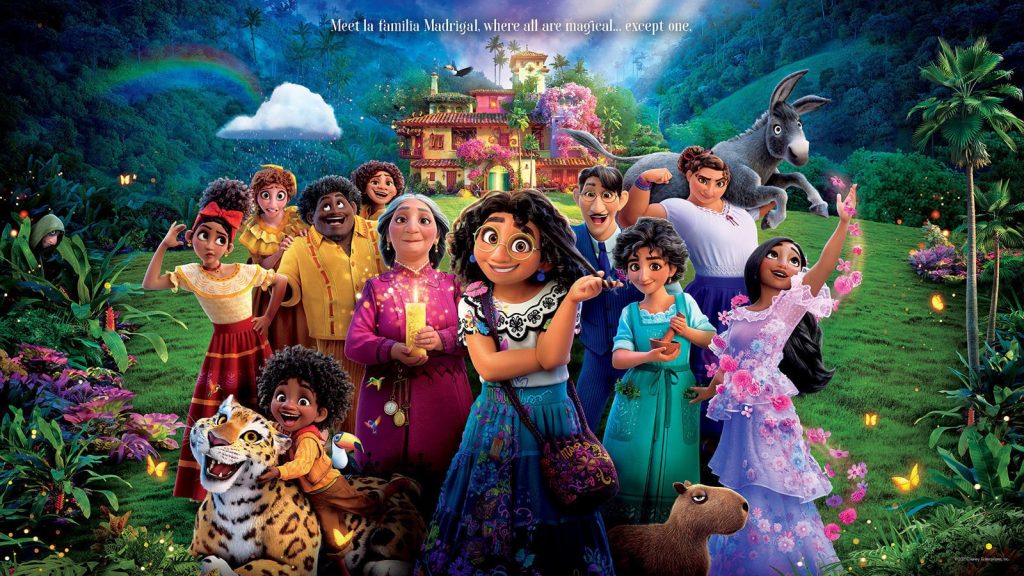 Encanto is the new Disney movie of the moment.

The main theme is about a family and the fascinating and complicated dynamics between its members who belong to different generations.

The story is based on the young Mirabel who does not receive her talent and she thinks that her family does not understand her.

Encanto tells the story of the extraordinary Madrigal Family who live hidden in the mountains of Colombia, in a magical house, in a lively city, in a wonderful and enchanted place called Encanto.

The magic of this place has given each member of the family a talent: aunt Pepa influences the weather, uncle Bruno foresees the future, Mama Julieta heals through food, Dolores hears everything, Camilo changes his appearance as he pleases, Antonio talks to animals, Luisa is gifted with super strength and Isabela makes flowers bloom.

Everyone has a talent, except Mirabel. But when she discovers that the magic surrounding Encanto is dying, she is the only one who manages to save the magic and her family.

Encanto is a Disney masterpiece.

Only 2 months after its release in Italian cinemas (November 24, 2021), “Encanto” has already finished first in the ranking for soundtrack among all Disney’s animated films.

The song “WE DON’T TALK ABOUT BRUNO” has conquered the digital charts all over the world.

The original soundtrack of the film Encanto, composed by Germaine Franco and Lin-Manuel Miranda has spread on social networks.

It is thanks to the success on Tik Tok and Youtube that Encanto’s music has risen to seventh position on the American Billboar 200 chart and has become a real hit.

Among the artists there is the Spanish singer-songwriter Alvaro Soler who interprets the song “Oroguitas Innamorate” and the artist Carlo Vives is the interpreter of the song “Colombi, mi Encanto”.

The Latin and explosive soundtrack is an integral part of the script and serves to bring out the interiority of each character.

The whole soundtrack is fun and catchy.

The first song dedicated to the whole family, it is one of the fastest pieces in the history of musicals and contains so much information sung at an astonishing speed.

The notes, the rests and the melody are essential parts of the narrative and a magical rhythm leads spectators to amazing worlds full of mystery and colors.

I recommend everyone to see it!