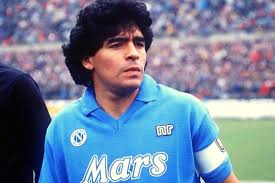 Everyone around the world is talking about it and some are very sad but others really don’t care.

WHO WAS DIEGO ARMANDO MARADONA?

Diego Armando Maradona was, and is, the best football player of all time. He was born on October 30th 1960 in Argentina. He began his career in Argentina’s strongest team (Boca Juniors) but a few years later he wanted to play in Barcelona (F.C. Barcelona). But he didn’t have a good experience there, so when Naples called him, he went immediately. He loved Naples and, thanks to him, the team SSC Napoli won the Italian Championship.

But it’s in Italy that his private life becomes ugly.

He was addicted to drugs. The first time he tried drugs was in Barcelona, but in Italy after a few months, no one know how, he contacted the Camorra and he became more addicted to drugs and started drinking.

In 1990 at the Soccer World Cup, Italy clashes with Argentina and, thanks to Diego Argentina wins.

When his career finishes, he starts to be a coach.

He had 5 children and one is Italian, his name is Diego Armando Maradona Junior.

DIEGO AND HIS DEATH

When he died all the people in the world were shocked, all the greatest football player and some celebrity like Messi, Ronaldo, Ibrahimovic, Ronaldinho, Pelè and singers like Maluma, J Balvin and others dedicated words and photos to him on social media, but some are indifferent to this death because they hated his private life.

Before his death he had had brain problems. A heart attack caused his death, but his lawyer says that doctors did not intervene for 12 hours.

There have been many events in honor of his death, especially in Argentina and Naples. Many people are desperate because he represented a dream, a great dream!

GOODBYE DIEGO, WE LOVE YOU.