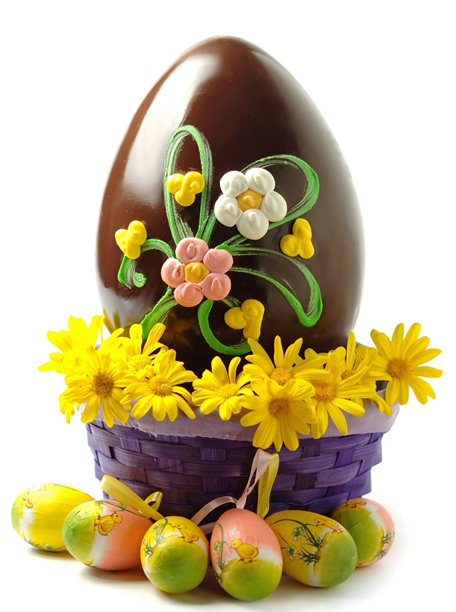 EASTER EGG: A JOY FOR THE EYES AND THE PALATE.

Over time the Easter egg has become one of the symbols of the same Christian holiday. In Christianity it symbolizes the resurrection of Jesus from the tomb. The tradition of the classic chocolate egg is recent, but the gift of real eggs, decorated with any kind of drawing is related to the Easter feast since the Middle Ages.

The exchange of eggs before Christianity

The egg has had symbolic features since ancient times. Eggs, in fact, have often played the role of the symbol of life itself, but also of sacredness: according to some pagan and mythological beliefs of the past, the sky and the planet were considered two hemispheres that went to create a single egg, while the ancient Egyptians considered the egg as the fulcrum of the four elements of the universe (water, air, earth and fire). The tradition of the gift of eggs is already documented among the ancient Persians where it was widespread the tradition of the exchange of simple eggs of hen at the advent of the spring season, followed over time by other ancient peoples such as the Egyptians, the Greeks and the Chinese. Often the eggs came hand-decorated. Clay eggs have been found in many tombs in Russia and Sweden. The statues of Dionysus found in the tombs in Boeotia carry an egg in their hand, a sign of the return to life. On the contrary, it was forbidden to eat eggs to the adepts of orphism as this mystery cult sought the exit from the infinite cycle of reincarnations, that is, the abolition of the periodic return to existence.

The Egg in Christianity

The Christian custom of Easter eggs began among the early Christians of Mesopotamia, who stained the eggs with red colouring “in remembrance of the blood of Christ, shed at his crucifixion”Catholicism took up the traditions that saw the egg as a symbol of life, reworking them in the new perspective of the risen Christ. The egg in fact resembles a stone and appears lifeless, as well as the stone tomb in which Jesus was buried. Inside the egg, however, there is a new life ready to blossom from what seemed dead. In this way, the egg becomes a symbol of resurrection.

The Easter egg in the Middle Ages

The spread of the egg as an Easter gift probably arose in Germany, where the tradition of giving simple eggs on the occasion of of this holiday. Originally, the eggs were boiled wrapped with leaves, or together with flowers, so as to take on a golden color . Also in the Middle Ages a new tradition took hold: the creation of artificial eggs manufactured or coated in precious materials such as silver, platinum and gold, obviously intended for aristocrats and nobles. Edward I, King of England from 1272 to 1307, commissioned the creation of about 450 gold-plated eggs to be donated for Easter.

The rich tradition of the decorated egg, however, is due to the goldsmith Peter Carl Fabergé, who in 1883 received from the tsar the task of preparing a special gift for the Tsarina Maria; the goldsmith created for the occasion the first egg Fabergé, An egg of platinum enameled of white containing an additional egg, created in gold, which in turn contained two gifts: a reproduction of the imperial crown and a golden chick. The fame of Fabergé’s first egg also helped to spread the tradition of the gift within the egg.  In more recent times the most famous and popular Easter egg is the classic chocolate egg, which has been very successful in the last century.

Nowadays Easter is not only a religious holiday, but also a celebration of joy and conviviality to be spent in the company of family and close friends. To understand the difference with the past, just ask today’s grandparents to remember how they spent Easter when they were children. In the time of our grandparents, for example, there was no such thing as “Christmas with your parents, Easter with whoever you want”: this holiday, just like Christmas, was one of the occasions of the year to be spent with the whole family together. Probably, in some families, the custom of visiting the Sepulchres on Holy Thursday and/or taking part in the procession in the village remained. There certainly remains great enthusiasm for organising and preparing the traditional Easter Sunday lunch. This year perhaps, because of the pandemic, the families will all be together to experience and enjoy at least the joy of being together.