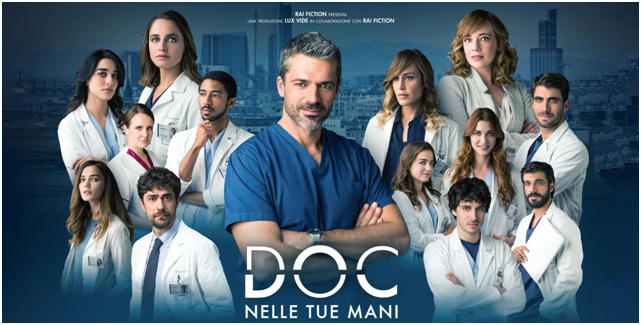 THE BACKGROUND OF COVID

The OMS declared the state of pandemic: for several months the world stopped.

Separated from everyone by four walls, we didn’t think about them, about their sacrifices, about the chance they were taking in a desperate attempt to save someone.

Today we want to bring you to the past, take you back to the days of confusion, fear and uncertainty. We want to bring you where there was a constant struggle between life and death, in the hospitals, through the Italian fiction Doc nelle tue mani.

The first season of Doc nelle tue mani aired on March, 2020, and the second on January, 2022, conquering millions viewers. The first season focuses on the doctor Andrea Fanti, a character inspired by the real doctor Pierdante Piccioni.

He was a chief physician of the emergency room of the Maggiore hospital in Lodi and of Codogno until, due to an incident, he lost twelve years of memory. Despite the great difficulties, Piccioni didn’t give up: he began to study medicine again, even if he was asked to retire, and again he earned the post of head of the emergency room. The first season of this Italian fiction tells his story, obviously inserting elements of fantasy.

Instead, the second one takes place in the period of pandemic, when every hospital had to deal with the health emergency of the covid-19.

Doctor Fanti of the second season is forced to fight with the virus as well as Pierdante Piccioni in real life. Infact, when the pandemic broke out, this brave doctor decided to deal with the virus as a medical professional in the front lines, doing his best to help. As he said, his mission is “to help the sick who have come out of the acute phase, so as not to make them feel abandoned”.

The health emergency in the tv series

The plot is centered on an event that shocked the fans of the first season and of its characters: the death of the doctor Lorenzo Lazzarini. He had gotten the Covid-19 and, due to respiratory problems, he needed the oxygen tank. But when another patient was having a respiratory crisis, Lazzarini asked a female doctor, Carolina Fanti, to give her his oxygen tank. He was a doctor and his role was putting his patients first. Carolina asked for help and looked for another oxygen tank, but there wasn’t and his friend died, leaving her with guilt.

For the whole season she wondered how things would have turned out if she had chosen differently and, like her, the other doctors. Every day, every hour, every moment they had to choose who to let die and who to try to save. In the meantime the medicines, the oxygen tanks, the places in intensive care finished, because pharmaceutical companies delayed deliveries and in the meantime people died. How many people did doctors see dying? We can just imagine it.

Doc nelle tue mani tells the stories of different doctors and their different reactions in the face of an emergency situation: someone began having panic attacks, someone took refuge in affections, someone in the job. Each of them is not just a doctor, but a person, with his fears, his hopes. During the episodes the characters will be against each other but then they will join as a real team; they understand that “teaming up” is essential to survive the daily difficulties and to “leave no one behind”, as the doctor Fanti says in the italian fiction.

At the end of the tv series, he makes a speech, giving the key to overcome suffering by trying to find the good in it. This speech moved viewers all over Italy because, after a period in which everything seemed dark, it opened our eyes to the future’s hope.

“Viruses arrive, they hit hard and we defeat them, always; it seems like a chain of senseless tragedies and instead it is not so because viruses have changed our DNA every time, they have made us evolve. […] Viruses also make us suffer excruciatingly, but it is never senseless pain. They made us what we are […]. So, it doesn’t matter what the future brings us because life is made up of mutations, death is a changed life and the only sure thing is that we don’t have to be afraid.”