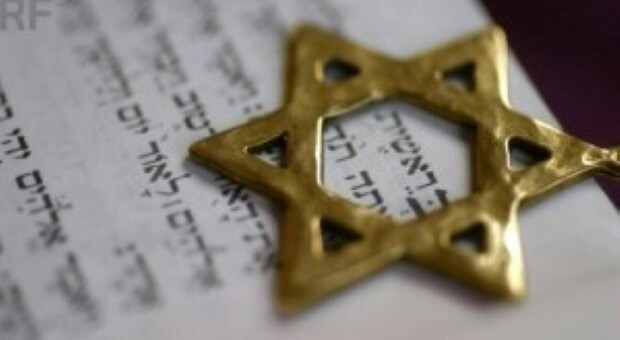 JEWISM IS A MONOTHEIST RELIGION BASED ON THE WRITINGS OF THE TORAH, DEVELOPING CERTAINLY PRIOR TO THE YEAR 1000BC.

The Star of David, in Hebrew the Magen David (Shield of David), means “Jews”. It stands out on the flag of Israel, on the synagogues of recent centuries, on prayer books, in communities, around the neck of the faithful, we saw it as a mark of shame and death sentence during Nazism, and still today the anti-Semites burn it , they scar him. Everyone, truly, is convinced that it has always contained the world, the heart of this people, even if it has made its appearance in other cultures. But no.

A very interesting libretto just released by the great Israeli philosopher Gershom Scholem (born in Germany in 1897, immigrated to Jerusalem in 1923) who dedicated his life to the study of mysticism and Zionism, tells us the opposite: beyond what he has become , because there is no doubt that today it represents Israel and Judaism, and we will see how it got there, the hexagram, Scholem documents, is not a Jewish symbol, it expresses nothing of the spiritual charge of Judaism, of its intuitive heritage, or even of the its history: it does not speak at all of a supposed seal of Solomon, as has often been said, or of the wars of the kingdom of David, it does not represent the harmony of the Creation described in the Torah, nor the union of opposites and their neutralization in the unity, in the one God, does not recall anything of biblical or rabbinic Judaism. Indeed, it is quite another. It is only a magical sign of protection, a kind of talisman widespread in numerous peoples, Phoenicians, Assyrians, Indians, among the Zoroastrians … and much later, as we know, in Byzantine churches, and also in mosques. In one of its first appearances in the Jewish world, the one on the synagogue of Capernaum in the second or third century, it is an evident ornament, Scholem points out, nothing less than placed next to a swastika! And so in many other places, perhaps near a five-pointed star.

By the time the war broke out in September 1939, more than half of German Jews had moved to another country. About 304,000 Jews had emigrated during the first six years of the Nazi dictatorship.

Between 1939 and 1941, the Jews were systematically deprived of their property and prevented from working. At the beginning of 1939, only about 16% of Jewish households had permanent jobs of any kind. Furthermore, life in Germany had become increasingly difficult due to the racial laws.

In 1941, Nazi anti-Jewish policies became even more radical. The Jews were forced to sew the Star of David on their clothes and the first deportations to ghettos and concentration camps began.

As of January 1933, about 522,000 Jews lived in Germany – classified as Jews based on their religion. More than half, about 304,000, emigrated during the first six years of the Nazi dictatorship, thus reducing the number of Jews in Germany (in what were its borders in 1937) on the eve of the Second World War, to about 214,000.

Between 1933 and 1939, Jews in Germany were subjected to arrest, economic boycott, loss of civil rights and citizenship, incarceration in concentration camps, random violence and the Kristallnacht (“Crystal Night”) pogrom, which was organized by the state. Jews reacted to the Nazi persecution in various ways. Forcibly segregated from the rest of German society, German Jews turned to their own social institutions and organizations and strengthened them. However, in the face of increasing repression and physical violence, many Jews fled Germany. Many more Jews would have left Germany for countries such as the United States and Great Britain had those nations been willing to welcome them.

In the years between 1933 and 1939, the Nazi regime had implemented radical changes that were very disturbing for the German Jewish community, in social, economic and other aspects of community life. Six years of Nazi legislation had marginalized and deprived Jewish citizens of civil rights, who had been expelled from all professions and commercial life. At the beginning of 1939, only 16 percent of Jews with any type of income had a stable job. Thousands of Jews were also interned in concentration camps, particularly after the mass arrests following the Kristallnacht (Crystal Night) in November 1938.

However, the most drastic change for the Jewish community in Germany came with the start of World War II in Europe. During the first years of the war, the Reich German Jewish Association (Reichsvereinigung der Juden in Deutschland) – which despite being officially led by theologian Leo Baeck had been transformed to be subject to the demands of the German authorities – worked to ensure that other Jews could emigrate, as well as to support schools and self-financing Jewish organizations, and to help the German Jewish community live with the ever-increasing number of discriminatory laws.

Immediately after the conflict began, on September 1, 1939, the government imposed new restrictions on Jews who remained in Germany. One of the first wartime ordinances imposed a strict curfew on Jews and prohibited them from entering certain areas in many German cities. As food began to be rationed, further reduced rations were reserved for the Jews; subsequent decrees limited the hours during which Jews could purchase food and other items and restricted access to certain types of shops, with the result that Jewish families often found themselves deprived of even basic necessities.

German authorities also demanded that Jews hand over items deemed “essential to the war effort” such as radios, cameras, bicycles, electrical equipment and other valuables to local officials. In September 1941, a new decree prohibited Jews from using public transport. The same month the now famous decree was also issued which required all Jews over six years of age to exhibit in public the Yellow Star (Magen David) sewn onto their clothing. Although real ghettos were generally never established in Germany, very strict residence rules forced Jews to live in well-defined areas within German cities, concentrating them in so-called “Jewish houses” (“Judenhäuser”). The German authorities also issued several ordinances requiring Jews who were able to perform forced labor.

In early 1943, while the last major deportations of German Jews to Theresienstadt or Auschwitz were being carried out, the judicial authorities enacted another set of laws and ordinances that legitimized the expropriation by the Reich of the last properties of Jewish citizens and their redistribution to German citizens. The persecution of the Jews through legislative decrees ended in July 1943

In the autumn and winter of 1939-1940, RSHA officers coordinated the deportation to the General Government of about 100,000 Jews from the Polish territory annexed to Germany, a territory formed by the so-called Gdansk-West Prussia Province, the Wartheland District and North Eastern Silesia. . In October 1940, during the second phase of deportation of German Jews, Gauleiter Josef Bürckel ordered the expulsion of about 7,000 Jews from Baden and Saarpfalz to southwestern Germany and their transfer to unoccupied areas of France. The French authorities absorbed most of those German Jews in the Gurs internment camp in the Pyrenees in southern France.

With Hitler’s authorization, the German authorities began the systematic deportation of Jews from Germany in October 1941, even before the SS and police set up the first extermination centers in German-controlled Poland. Following the Eleventh Decree of the German Reich on the Laws of Citizenship (November 1941), German Jews “deported to the East”, when they crossed the border, suffered the automatic confiscation of all their properties.

Between October and December 1941, the German authorities deported to the Lodz, Minsk, Kovno (Kaunas, Kovne) and Riga ghettos about 42,000 Jews from so-called Greater Germany, which included Austria, Bohemia and Moravia: the latter had been taken from Czechoslovakia and annexed to Germany. The German Jews sent to Lodz in 1941, together with those transferred in the first half of 1942 to Warsaw, to the transit ghettos of Izbiva and Piaski and to other locations in the General Government, were then deported with the Polish Jews to the Chelmo extermination centers. (Kulmhof), Treblinka and Belzec.

Some Jews forced to board a train bound for the Belzec extermination camp.

Between November 1941 and the end of October 1942, the German authorities deported more than 50,000 Jews from the so-called Greater Germany to the ghettos of the Baltic States and Belarus. Once they arrived at their destination, the SS and the police forces immediately shot most of them. The few Jews selected for forced labor were kept separate from those spared by the SS as useful in some specific professional sector and who had been interned in special German sections within the Baltic and Belarusian ghettos.

Those “German ghettos”, created within a larger ghetto, characterized the cities of Riga and Minsk in particular. The SS and the police killed most of those German Jews when they liquidated the two ghettos in 1943. After October 1942, the German authorities deported most of the remaining Jews in Germany directly to the Auschwitz-Birkenau extermination centers. or Theresienstadt.

Those “German ghettos”, created within a larger ghetto, characterized the cities of Riga and Minsk in particular. The SS and the police killed most of those German Jews when they liquidated the two ghettos in 1943. After October 1942, the German authorities deported most of the remaining Jews in Germany directly to the Auschwitz-Birkenau extermination centers. or Theresienstadt.

German law initially exempted war veterans and persons over 65 from anti-Jewish measures (including deportation), as well as Jews who had a German “Aryan” (“privileged marriage”) spouse and their sons. In the end, however, the Nazis deported disabled and war-decorated Jews, as well as elderly or high-ranking Jews from the so-called Greater Germany and Holland (occupied by the Germans) to the Theresienstadt ghetto near Prague. Although Theresienstadt was used by the SS to create a fictitious image of humane treatment of Jews, in reality it was only a transit camp for most Jews destined to be deported “to the east”. The SS and police periodically moved Jews – including German Jews – from Theresienstadt to the centers and extermination sites in occupied Poland, Belarus and the Baltic states. In addition, more than 30,000 people died in the Theresienstadt ghetto, mostly from starvation, disease and mistreatment.

Departure of a train of German Jews who are deported to Theresienstadt.

In May 1943, the Nazi authorities announced that the Reich was “judenrein” (“liberated from the Jews”). By that time, mass deportations had left fewer than 20causto, including most of the Jews deported out of Germany.

I know they managed to avoid arrest and deportation with the help of non-Jewish Germans pitying their situation.

In all, the Germans and their allies killed between 160.00 and 180,000 German Jews. Some survived because they were married to non-Jewish people or because racial laws classified them as Mischlinge (that is, of mixed ancestry and only partly Jewish) and therefore at least temporarily exempt from deportation. Others, called “U-boats” or “submarines”, lived in hiding.